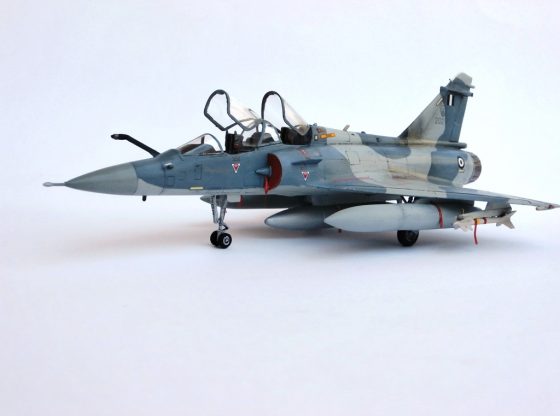 The Mirage 2000 is a French build single seat, single engine, delta-wing multi role and all weather fighter airplane.  It was incorporated in the Hellenic Air-Forces’ (HAF) arsenal in 1988 with the “Talos” covenant, based on which, 40 aircraft were purchased.  Between 1988 and 1992, 36 Mirage 2000 EGM’s and 4 Mirage 2000 BGM two-seat trainers were delivered to the HAF.

It is the first fighter of the HAF with an electronic flight control system.  The rest of its electronics are consisted of 2 main computers, inertial navigation system and a digital data transfer unit.  It also has the integrated self-protection system ICMS 2000, shielding the aircraft from any threats coming from the air and/or from the ground.  The Mirage 2000 has the ability to carry a large selection of weapons systems, with the Greek Mirages having the ability to carry Super 530 / Matra Magic air to air missiles.  They are used extensively in interception missions but also against surface targets with the addition of AM-39 EXOCET missiles.

Basically, there are two kits in the 1/72nd scale for the two-seater version of the Mirage 2000.  One form Italeri and one from Heller.  The first has a very good fit and detail with engraved panel lines but represents the prototype aircraft and unfortunately doesn’t depict correctly the aircrafts’ silhouette.  On the other hand, the Heller kit, which is the one chosen for the build, correctly grasps the shape of the French fighter, while the detail is a mix of engraved and raised panel lines, but as with the one from Italeri, needs modifications in order to give a correct Greek version.

I started from the cockpit which was replaced with the one from the Italeri kit along with the instrument panels and the clear parts.  The seats were improved with the use of masking tape, copper wire and aluminum foil and after painting them I added some self made Remove Before Flight strips for more realism. Next came the additions that had to be made in order to represent a Greek aircraft.  On the aft section of the fuselage I added a spiral made from plastic and copper wire.  On the vertical stabilizer I added various antennas which are not given in the kit and the pitot tubes on the nose.  On the left air intake I opened a whole in order to accommodate the headlight. I wanted the final configuration of the aircraft to have 3 fuel tanks, so I had to build the 2 fuel tanks carried under the wings, as no company offers them, with the exception of the “bulbed” ones, while the HAF uses the supersonic ones.  For their construction I used the fuel tanks carried by the Rafale and the F-16.

“Playing” with the Lifecolor paints

I painted the model with brushes and used acrylic and enamel colors.  For the basic grey of the camouflage I used Humbrol 127, while for the blue I used Lifecolor UA-045 to which I added white and grey in order to achieve the right tone.  The radar cone was painted with Humbrol 128.

The whole was sealed with Matt Varnish by Humbrol.