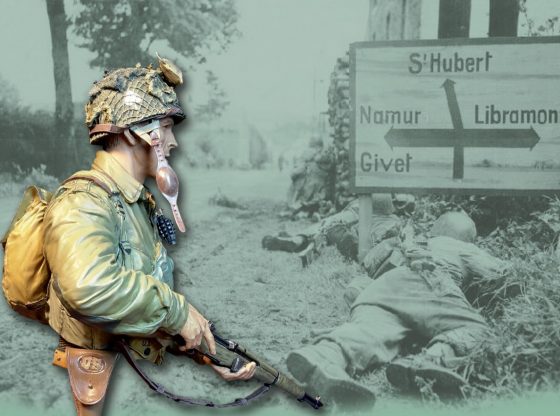 A TRIP IN SPACE AND TIME…

Somewhere in time…
Once upon a time, many years ago, maybe even 25 years ago, a stroll at Kefalari Kifisia brought me facing an absolutely newfound shop window, window full of “little soldiers” for grownups. As a kid, I had my share of experience with airplane kits, but this sight didn’t just only wake up the little child in me, but was opening new horizons for me. As such, I travel to Carentan the day the US paratroopers entered it after D-Day, have a quick trip to Egypt with Napoleon, go through General Custers’ Last Stand at Little Big Horn, watch a French Musketeers’ duel in front of a church and I also get to meet interesting people, like German Panzer General Guderian, the pirate Black Beard, our revolutionary hero Papaflessas and many-many others.

Damian Lewis aka Richard Dick Winters
Clean up all the pieces, glue them together, put some putty wherever necessary, followed by a coat of primer. Right somewhere here is where the real charm of the build begins, painting with acrylics, mostly Vallejo. Some pieces, like the weapon, the hand grenade and all other little pieces are painted on their own before gluing.

Painting mister Winters
A detailed research on the internet revealed that the main color of the US paratroopers uniforms right after the landing is succeeded unfortunately only after mixing two, or
even three different colors. The funny part is that almost every source recommended different colors. After a lot of different tries, I used a mix of us dark green, middle stone and us field drab. Following the completion of the main coat and after three passes of it, I did some photo shading, which are very easily done by creating alternating lighter and darker tones of the basic color. Using a wet brush, I did sequential passes to the parts representing folds etc. Especially with the initial softer and lighter tones, I paint larger parts, which ultimately go smaller and smaller as the color becomes lighter and lighter. On the metal parts I used shades of black and steel by air Vallejo, highlighting them with dry brushing. It is also important to use a darker shade of color in all joints so that the model has a pseudo 3d feel to it.

In a figure, especially a large scale one, creating the face is the most important step. I used heavy skin as the base and constant photo shadowing where the light hits the part and in all the engraved and inner parts. The parts with the most light are the nose, the jaw, the cheekbones, the upper part of the ears, different spots on the forehead, darker just below the lips, the nose, creases and wrinkles. With a very wet brush, a little bit of color, sequential color tones one covering the other and constant experimenting. For the cheeks I usually use a mix of a darker tone with some brown.

I left for the end my technique for the eyes, one of the most difficult parts of the whole project. There are different techniques. I usually paint the pupil black and on it I paint the real color of the character, leaving a thin black outline. A touch of black for the iris and a touch of white towards the direction where our characters’ look is turning gives us the needed perspective. At the end, a highly diluted smoke color and a coat of gloss varnish completes the job. For the final touch, a coat of dilute matt varnish is applied on the whole figure.