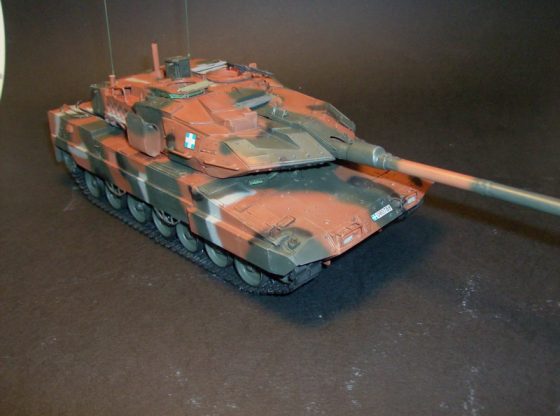 For the construction of a Hellenic Leopard 2 A6Hel, the most suitable kits are two kits from HOBBYBOSS, the 82404, (Swedish Strv. 122) as well as the 82403, (Leopard 2 A6EX).
In the box we find 11 sprues with 406 parts and photo-etched parts.  Clear parts for the periscopes are also included.  The vinyl tracks are very detailed.  The grey plastic used in the kit is relatively soft and easy to work with.
Construction starts as usual with the suspension system, completed without any problems in 5 stages, (photos 3, 4).  The only remark here is that the aft towing hooks are wrong and instead of the parts B38 – which have to be mounted on the front – the parts B39 have to be used.  It’s worth mentioning, that during the construction, only the drive sprockets and aft idlers are to be glued on, in order to facilitate the building and painting process.  The road wheels are glued at the end.

Hull, glass, mirrors!
Moving on the upper part of the hull, “surgical” interventions were done in the following places:  the three small bases seen on photo 6 were removed.  The mirrors, if glued on the open position don’t require any changes, but if glued on the closed position, the lower part of the base has to be cut and the remaining piece has to be carefully rotated by 90ο

Also, the reflectors enclosed in the red circles have to be removed and the central one has to be replaced by two respectively cyclical pieces from plastic (photos 8, 9).  Additionally, very small holes were opened using a small drill for the hand grips, which were made with thin wire (photos 10, 11, 12, 13, 14, 15).

Next step was mounting the clear plastic pieces for the drivers’ periscopes.   For better realism it is … proper to paint them with transparent green and then mask them before painting.  It is however possible to paint them with the color used for the camouflage and then apply a coat of silver paint and finally green transparent, a technique employed in our built.

For a better fit of the frontal armor, a piece of about 1,5mm was cut (photo 16).  Then the various details such as lights and the horn were added (photo 16b).  For the light guards, I didn’t use the flat photo-etched parts from the kit, but instead replaced them with 0,6mm copper wire for greater realism (photo16c).  Finally and before installing the metallic grills for the engine, the engine fan was painted with a dark metallic color.

“The tower of Sighs”

Most of the most extensive modifications were made to the turret of the tank, utilizing almost every tool that was on the bench.  It began with the removal of the piece shown in photos 18, 19 and 20, with a basic detail:  Keep the loaders’ periscope and remove the pieces shown on photo 20b.  I reconstructed the part using 1mm thick plastic sheet as seen on photo 20c and installed as seen on photos 20d and 21.  I should mention that its preferable to cut your plastic sheet about 1mm wider than needed and then reshape it to the wanted dimensions.
I left the …contraption to dry and moved on on the main gun and the turret base assembly.  Extra caution on this step, as the long barreled gun has to be used.

Next was the trouble free assembly of the turret with a slight deviation from the instructions.  Parts D2 and D3 are assembled the other way around than shown on the instructions and finally the small plates were added, as seen on photo 35.

Continuing with the two boxes in the back of the turret, were additions and subtractions were made with plastic sheets as well as the asymmetrical configuration as shown in photos 36 and 37 plus some more modifications, (photos 38, 39).  Finally, two “hinges” were added made from plastic sheet, (photos 40, 41).  On the tank commanders’ periscope I added the extra armor again from plastic sheets.

Next, I made the rails, drilling the holes with a small hand drill (photos 43, 44, 45, 46) and added plastic sheets behind the crew hatches, as shown on photo 47.  Circumferentially of the plates I glued a thin plastic rod using cyanoacrylate glue, bending the rod gradually and carefully and placing them in their respective positions (photo 48).  As for the smoke grandee dischargers, I used the corresponding kit parts (photo 49).

Next was the construction of the sides “baskets: which I made with copper wire and drilled plate metal mesh, attached with cyanoacrylate gel glue and the help of accelerator (photos 50, 51, 52, 53, 54 and 54b).  I used a plastic rod to make the wind sensor and the smaller sensor on the aft right corner of the turret (photos 55, 56).

I went on with adding spare track links and grills for the A/C unit as well as various small details, such as hand rails, hinges and bolts.
Finishing the …marathon, I made various covers and the antenna bases.

The camouflage of the LEOPARD 2 is very different from the usual NATO camouflage of the rest tanks and vehicles in the Hellenic Army. For the Red-Brown color I mixed Humbrol 62 with 1-2 drops of Humbrol 24, adding gradually Humbrol 60.  For the Green, I used Humbrol 78 adding a few drops of Black Matt.  For the Light Grey, I used Humbrol 129 with the addition of a little bit of Red 60. I attempted as much as possible for a purest representation of the camouflage and next I painted the various details, the road wheels and tracks.  After the compulsory use of floor polish, I applied the decals from LM Decals and finaly I coated the entire model with 2 coats Matt Varnish from the Galeria series of Winsor & Newton.

Quick Tip!
Start mounting the track from the forward side with the help of a pair of pointed tweezers.  As mentioned above, the road wheels were left out until the end.  After mounting them around the drive sprocket, they are connected using a heated screwdriver and after that the road wheels are put in place starting from both ends, i.e. first with the first and last wheel, moving towards the center

The photos of the real tank were kindly provided by Panagiotis Fanaropoulos (RawShooter) and Triantafilos Metsovitis (LM Decals).