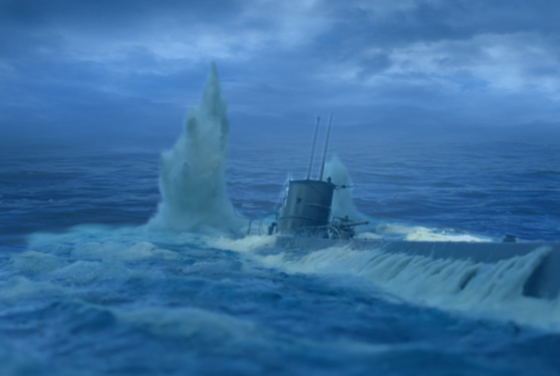 Everything started years ago when I purchased the old Revell kit of U-47 with interior in the 1/125th scale.  The kit comes with basic details for the scale of the interior, as well as crew figures.

Motivated by “Das Boot”.
After assembling the hull, the kit was abandoned to its fate for quite a long time.  Watching the movie “Das Boot” – those who haven’t seen it yet, shame on you – was the impulse for the construction of a diorama having as the main theme Revell’s submarine.

The scenography involved water splashes from ships’ salvos and the submarine performing an emergency surfacing in the stormy Atlantic Ocean.  The core element was more the surfacing of the submarine than the relatively small water splashes. The construction of the sea began with a Styrofoam sheet 5cm thick, hollowed out in the middle “fenced” with wooden slats.  Next I applied construction putty in successive layers and painted it silver, blue and various shades of grey.  The “bases” of the splashes were painted turquoise and the entire surface was coated with Gloss Varnish. Next was the formation of the splashes with silicone, cotton and turpentine with a lot of patience due to the non-cooperative and heterogeneous materials.  The final step was dry brushing of the wave tops.

The long forgotten hull was placed on my working bench and after the necessary filling in with model putty and the closing of the rather huge opening on the side – i.e. Grand Canyon – with sheets of plastic, the entire model was painted grey.  After the basic color was dry, the model received a lot of weathering with successive washes of diluted black color as well as dry brushing with different shades of rust almost on the entire length of the sub. I improved the railings and deck gun using stretched sprue as the kits’ parts were too thick and out of scale and relatively “poor” in detail.  Next step was the opening of all free flow water vents on the hull and gluing on them stretched clear sprue with transparent silicone, cotton and acrylic White color. Next step was the…

The model was placed on the base and I started with the final preparation of the water splashes.  A small “ball” of aluminum foil formed the basis of the larger one, giving the basic shape of the explosion with tooth picks and wooden skewers.  The hodgepodge construction was covered with water-soluble glue and dry brushed with white paint.  A thin coat of transparent silicone was applied and before it dried I pressed pieces of cotton on it.  After removing any pieces of cotton which didn’t stick on the silicone, the water splash took its final shape.  The rest of them was made following the same technique. Next stage was applying cotton with silicone to represent the water foaming on the main deck as well as transparent celluloid dipped in silicone for the water on the conning tower.  Finally, the entire model was coated with Gloss Varnish.

Figures in …the operating room.
The crew figures that came with the kit didn’t have the appropriate postures, so with a hobby knife and glue I did the necessary modifications.  I painted them according to bibliography and the movie and placed them on the diorama.

Translated by George Roumbos
You may see all the photos here…

Blackburn Buccaneer “Dangerous, Nuclear and… pink!”
Priming… like an artist