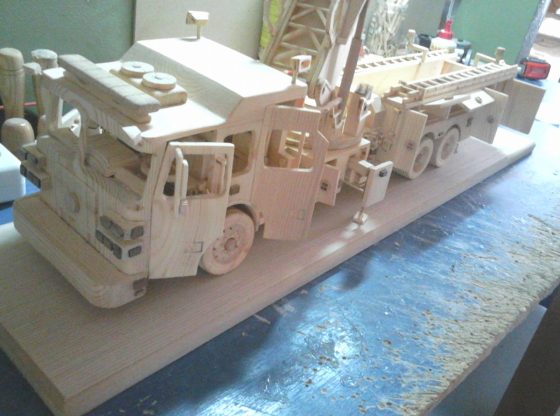 My latest project is the fantastic and gorgeous looking fire ladder truck from the company Sutphen. It is US-made and based on critics it has gained it is a unique and ultimate tool for extinguishing fires and rescuing people from tall buildings. The main reason that I chose it is no other than the ‘’ challenge ‘’ that presents its difficulty of construction. I think everyone involved in modeling has the same feeling to a lesser or greater extent.

The degree of difficulty is very high and requires a lot of patience and perseverance. In this model, as in any other I have made so far, the plans and blueprints were purchased from internet. Once I made the necessary calculations, I started from the front of the model and the cab. Drivers’ positions, throttle, brakes, levers, steering wheel and whatever else can be built. As you can see in the pictures, everything was made from scratch. I measure with a caliper exactly how much every piece should be down to the millimeter in order to allow the possibility of movement. When the project is completed the door will open, the steering wheel will turn and generally all parts of the vehicle will be functional!

The details
Next step was the details. So, the bottles, adjusting levers for the height / depth of the driver’s seat and various other little things were created and installed in the cab. Finally, I placed the vehicle’s roof using clamps to glue it properly in place. Next were the doors. Guided by the blueprint which was purchased from the internet and with the help of small triangles (hangers), I did the hinges for the doors completing the mechanism that allows them to open and close as in the real vehicle!!! It was one of the hardest parts of the construction and there were times when I thought I would not make it. I made the front wheels in order to complete the mechanism that allows them to turn as well.
With the cab complete, I proceeded towards the tail of vehicle. The rear was very easy as it is squared, but it required some calculations. It has many doors of different size and different orientation (vertical, horizontal).

All were made with the saw and shaped with sandpaper to be ready to be placed in the body of the vehicle. Once in place, some more details were built, like valves, switches etc. All this work is done completely by hand without the use of any professional power tools. It required several days of work in order to complete the project.
The small ladder at the side of the vehicle which gives the personnel an easy access to main ladder, described below, was made with a small saw, crosswise to make the boxes shown there and in the back of the cab. All this to make took 10 to 12 days in order to get to the point to complete just one piece of the whole front, as shown in the photo.
The same procedure is followed for the opposite side of the vehicle with fewer doors though and with the necessary details such as lights, flashing lights, valves, switches
etc.
After that, the vehicle is ready to get its axles. The rear axles are made simply and easily by placing pegs on a straight line, just like drive shafts coming from the differential
of the vehicle and then the wheels were placed. At that point the construction of the real is a great help, as otherwise we would have to align it with a bubble level so as to keep all 4 wheels on the ground. At the front, however, things were much more difficult as from the start I wanted steering and by saying steering, I mean racks and the alignment of the axles in height and position so one is not in front and the other further back. All has to be in perfect harmony and aligned so that the system will work properly without ups and downs! Regarding the handling of the vehicle it is made through the steering wheel, after I opened the proper pinhole to insert the steering column which will embrace the wooden pinion I made, forcing the gear of the racks to move turning the wheels right – left.

Three level Ladder.
The big headache…
and the beauty of the model!
The ladder was the ultimate challenge for me because photos from the top did not exist anywhere. It took me 2-3 days to figure out where about is the height of each beam and how they were linked with each other. It was a small ordeal but eventually I found the solution to the problem. I started with making the base that supports the entire structure and then, as you can see in the photos, I did the first level, the basic, of the entire ladder. At first the vertical bars were built, followed by the crossbars, where the water hose is stored internally and ends at the personnel platform at the top of the ladder.
The procedure for the ladder was very time consuming, as it takes several small pieces which, when drilled, you must make the appropriate connectors on the floor of the ladder to keep them upright and stable. I used glue for their installation in order to ensure the stability of the whole structure.
This procedure was repeated three times and finally the platform was placed with the remaining details that were made with pegs and rounded pine pieces, creating the hoses and the horseshoe shaped bracket that keeps the platform stable.These details were completed after two weeks of work. After that, I completed the railings and the project was completed. The finishing touch was the varnish. The whole project lasted one month and twenty seven days but I think you will agree with me that it was worth it. Thank you all and continue with your amazing projects!

History:
Sutphen began in 1890 by C.H. Sutphen and now has 4 manufacturing plants in Amlin, Hilliard, and Springfield Ohio and White Lake, New York.

Products
Sutphen produces all types of fire related vehicles on their own chassis including the usual engines, ladders, and rescues but also provides bodies for commercial
chassis applications. The company strictly produces midmount aerials as either a tower ladder platform (with a bucket/basket) or in a ladder tower form (no bucket) plus industrial application aerials. Previously, Sutphen had produced tillers in the 1990s including a unique tiller-tower concept where the bucket of the tiller aerial also acted as the tillerman’s cab. The concept never made it to production.[1] All Sutphen aerials are made of Aluminum alloys and fastened with aircraft-type Huck
Bolts.[2] The hydraulics are custom designed and built by the company for their applications.[3]
Sutphen introduced its tower ladder in 1964[4] mounted on a Ford C chassis but production models were mounted on larger chassis including Duplex and GMC.[5] Models were 65, 75, or 85 foot models using three boom sections. Ground ladders were stored in the rear of the
vehicle plus additional ladders on one or both sides of the body above compartments. The later addition of a 100-foot model used four boom sections and even later the Magnum 110 foot model used five. The SPH-100 model was introduced in 2004 originally on the shortlived Imperial chassis with production on the Monarch chassis. This model uses five boom sections to reduce overall length and raised a much larger bucket/basket above the chassis body. All ground ladders are stored at the rear of the vehicle to increase compartment space.
Sources: https://en.wikipedia.org/wiki/Sutphen