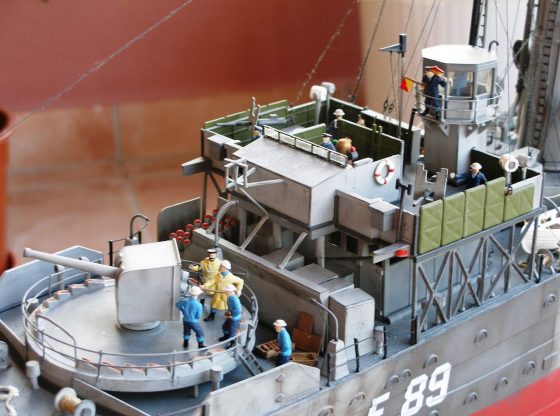 The Royal Hellenic Navy, as it was called during WW 2, acquired during the war, on loan from Great Britain, 4 Flower Class Corvettes, named “Kriezis”, “Tombazis”, Sachtouris” and “Apostolis”.
Form those; the first 2 took part, besides their other missions, in the great allied landings in Normandy, known as “Operation Overlord”, on D-Day, June 6th 1944, being the only Greek ships in the Operation..

History
“Tombazis”, (F-89) was built in the Fleming & Ferguson shipyards in Northern Ireland in 1941 and was commissioned to the Royal British Navy under the name “HMS Tamaris”,  (C-89). It was handed over on loan to the Royal Hellenic Navy in November 1943 at the naval base of Chatham, England.
Prior to the Normandy landings, “Tombazis” was on escort duties in the Northern Atlantic, taking part in the Battle of Atlantic. It also took part in the landing operations in the Southern France. After WW 2, it saw action during the Greek civil war, finally returning to the Royal British Navy in 1959. It was de-commissioned and scraped

The Kit
Building – R/C conversion
The kit is the old Matchbox kit, re-boxed by Revell. It consists of a large number of parts with their old age evident almost everywhere. Difficult fit, flash and mold marks on almost every part. All railings where replaced by metal ones, while for those on the bows I used 2 sets of readymade robust metal railings for maximum sturdiness. Wherever possible, I replaced the kits’ parts with other from metal, plastic or wood, all scratch built from my spares box and various lengths of styrene plastic shapes, strips, and sheets by evergreen. Some details was added to the life boats, such as wooden crates and
plastic oars, wooden ammunition crates for the main gun in the bow, extra ammunition made of plastic and various wooden crates randomly placed throughout the ship. All the bollards were made with thin metal wire while the cables out of waxed thread. Very thin thread was added at the depth charge cranes. The flags were made out of aluminum foil and their message translates roughly into: “I am the squadron leader, wait for further instructions”.
Painting, weathering and varnishing was made entirely with Humbrol enamels, while the crew figures were painted by Mr. Mamakos Dionisis.
The models’ big size, length 88 and beam 18 centimeters, gives the opportunity to convert it to R/C. From the onset of the project I had exactly that in mind as the conversion of R/C is quite easy and the end result is very rewarding as it sails beautifully!

Thus, in the interior all the connections of the four pieces composing the main hull of the boat were reinforced with lengths from plastics sheet while  from the middle and to the front I placed large pieces of styrofoam for buoyancy in case the model takes on water. In order for the model to “sit” correctly in the water, except from the battery block I had to add approximately 1750 grammars of led Nr. 2 BB pellets as ballast in the bilge, which were fixed in place with wood glue.
I made wooden platforms for the electronic speed control, the receiver, the motor and the rudders’ servo mechanism. I used an electric motor with a 7:1 reduction gear to add more reality to the ships’ speed. The entire model is controlled through a simple 2 channel Futaba remote control, (transmitter). To facilitate the access to all internal mechanisms, (battery block, motor, reduction gear, speed control, drive shaft) – following the closing of the main deck – the aft part of the superstructure is left unglued.

To ensure that no water will pour in from the deck, I built a low watertight bulkhead from styrene sheets around the base of the access hatch, while the 4 scaffolds holding the inflatable rubber life boats and the main rigging lines ending at the aft superstructures are all are all detachable to remove that specific piece.
The deck section under the stern depth charge racks was cut to create a hatch to access the rudder mechanism with the installation of one more watertight bulkhead.
The rudder itself had to be modified as well. Because on the one hand I did not want to lose the characteristic shape of the rudder but on the other the one that came, in 2 valves, with the kit was daunting to break under extreme stress or hitting an underwater obstacle, I purchased another specific for R/C models and after I trimmed it to the desired shape and size, I glued it inside the 2 halves of the kits’ rudder.
The kits’ propeller was left aside and replaced by another with the same pitch, specific again for R/C models.

Epilogue – conclusions
It is a known fact that “Tombazis” was modified in the bow section and the fore superstructure from the rest of the Flower class corvettes. Unfortunately during the built I was unable to find the appropriate photos showing these specific differences on the mentioned parts of the ship. An attempt to communicate with the shipyards remained unanswered, so I was forced to proceed according to the kits’ plans.
Of course Murphy’s law was once again confirmed – unfortunately – with the completion of the construction of the model, I finally found one photo which adequately shows the changes and differences that “Tompazis” had from the rest of the class… Too late for reconstructions…

The model weighs about 3,5 kg while the total construction time amounted approximately 400 hours.
As you can see in the photographs it combines the quality and fidelity of a static model with the delight of sailing an R/C boat!