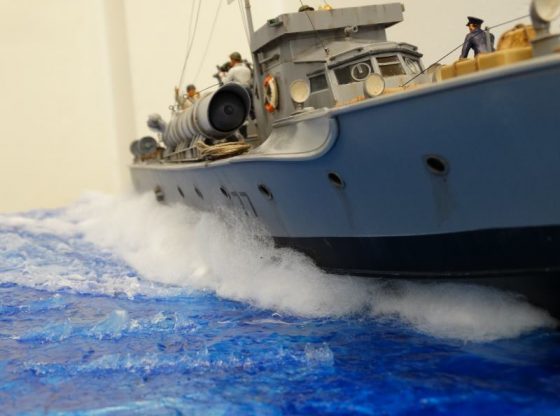 Building a ship under scale is always a challenge.
Even bigger challenge is placing it on the sea. This is how this project started with the symbolic title Mediterranean on Fire” as according to the kits instructions vessel nr 77 saw action and was finally sunk by a German U-boat on the Western Mediterranean during WW II.
The while project took about eight (8) months to be completed, but by judging from the result I believe it was worth it

HISTORICAL FACTS
In 1940 Vosper Ltd took the project on behalf of the British Royal, to build a number of speed boats based on the designs of racing boats, in order to cover the need for fast and flexible vessels. It is worth saying that the Greek Royal Navy had also ordered two of these vessel but they were never delivered due to the beginning of the WW II. They were equipped with three engines delivering 4,200 hp, which in combination with its light weight, could deliver speeds up to 40 knots, a very impressive speed for that time. Its armament consisted by torpedoes, depth bombs and a twin Vickers anti-aircraft machine gun as protection from enemy airplanes.
During the war two more machineguns will be added at the vessels sides as well as a 20 mm Oerlikon canon on the front. Its activities vary from SAR missions to escorting convoys and shore surveillance.

THE KITS
ITALERI 1/35(5610) VOSPER MTB 77
A huge kit with dimensions 72X34,5X15 cm, which includes plastic parts, transparent and p/e in a very good packaging. Screws and ropes are includes as well as decals for three different ships. Together with the building inductions one can find in the box a very useful manual with authentic pictures of the time that can solve or create questions in anyone that wants to build it.
ITALERI 1/35(5616) MTB CREW
As we had already to build a diorama, it was essential to use the kit with the MTB crew. The kit has seven (7) figures with separate hands and many accessories like helmets, hats, optical telegraph and life vests, give the modeler the ability to improvise. As you will see below, there were a few improvements in at least one more figure

BUILDING THE VESSEL
The building starts with the body of the ship, which cones in a one piece, which tells us that the kit can be also built as a remote control if we wish to. After gluing the front part we have a complete body of 63,1 cm !! After installing the glass windows we complete the body by putting on the one piece deck with screws that are included in the kit.
This is the actual beginning of the built which is easy, fast and straight forward by completing the built of the deck. It is worth mentioning that there are two bridges included in the kit, one open and one closed both with a good details, although not much can be seen through he closed one once the building is completed. All the parts of the deck like torpedo tubes, life boats, torpedoes and machine gun turret were assembled, painted and partially weathered, where ever this was necessary, and then were placed on the boat.
The only improvement we did was building a wooden floor out of balsa wood on the upper deck.

FIGURES BUILDING
As we mentioned before, all the figures come with separate hands and feet, but not heads, so there a few limitations on their setting. They will need very careful cleaning and gluing of the different parts, especially the captain since his armor comes in two pieces.
The building scenario was for an air raid, and so one of the figures had to point to the sky.
After a mild surgery, the figure received different hands and head from figures spares… A German helmet and German weapons ! (Souvenirs ? )

PAINTING – WEATHERING
As we have already mentioned, priming and painting was done in stages. Our primer was AK 175 Grey Primer sprayed with an airbrush. All colors were Gunze acrylics but we will not mention the different numbers as there can be numerous combinations of grey and its shades, depending on what one wants to represent and how far he wants to go with the weathering.
Regarding the weathering, we must stress that the boat has many wooden parts and this is why weathering must be done with caution. We used Burnt Umber oils and AK 013 Rust Strikes. To represent the drying sea water we used AK 306 Salt Strikes for Ships, which gave a very good result.

BASE
And now we have to deal with the biggest challenge of all which was to represent the“wet element”in such a great scale since the base covered an area of 90 cm in length by 40 cm in width! We started by using a piece of 5 cm DOW blue-styrofoam, the kind that is used in constructions, and sketched the base of the vessel and its position on the base. Then, with the use of a modeling knife we took out enough of this material in order for the back of the ship to “sink” almost until the middle. At the same time we formed the wake (boats trail in water). Next move was to cover the whole base with wrinkled aluminum foil, to represent the depth of the sea and paint it using an airbrush with shiny blue from front to back. When dried we repeated the same process using transparent blue and spraying from back to front. Finally, two hands of floor shining liquid to protect the colors and give a natural shine to the sea. When everything was dry, using a large quantity of transparent silicone we glued the boat in its designed position, with a slight turn to the right in such a way that the silicone would overflow. Using a spatula, and while the silicone was still wet, we formed the waves from the engines wake. But we were still not finished. Again using silicone we formed the waves on the left and right of the boat moving away and getting smaller and smaller as the distance from the boat gets larger. The foam of the waves is cotton which was glued around the boat. The final finish of the waves foam is Synthetic fiber used in cooker hoods which we pulled out with our hands in order to increase volume and reduce thickness. When the silicone was finally dry, we dry-brushed the tips of the waves using white mat. Finally, we used some balsa wood to cover around the insulating foam. We used a regular printer for the name of the boat and “formed” it with a cigarette.

How to create your own sewer covers
TIRAN 4 LATE TYPE