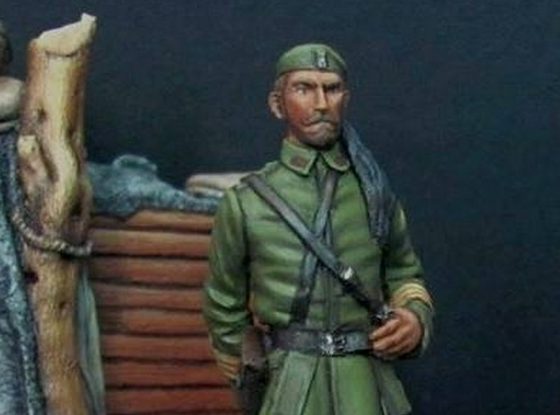 It has been a while since I last took upon a Greek subject and I did one because I saw this figure of a Greek Evzonas officer from the 1st Battalion of 1/38 Evzones Regiment of the 1st Division at the Asia Minor campaign in 1921, as it is mentioned on the kit.

Sculpting was done by Thanos Vasilikos and although I liked very much the impressive presence of the original when I saw it painted but the copies are not so satisfactory. The figure needs a lot of cleaning while there are some issues in my opinion on the back side of the kit. We do not need to go any further on that here as we are talking about the painting and not the sculpting or molding. The original idea was to set a scenery in Asia Minor and since at that time ( WWI and later years) trenches were the main areas of action, I built a scenery that saws these conditions and way of warfare.
We begun by constructing and painting the scenery. The base is a rocky ground which was built some time ago by one of the best diorama builders in Greece, my friend John Vasilaki, for an idea we had that did not go through. So, I cut some parts and adjusted the base in such a way to get some extra depth in the distance between the figure and the wall. A big wooden barrel and some dry plants were added on the wooden wall scenery with the bags of sand, the overcoat and the small bucket.

The wall was painted grey and the overcoat was painted white but with a lot of dirt on it (Us Field drab + black).
I wanted to have an extra dirty look on the bucket so I used Black Earth pigments, while on the lower parts of the wall we used black + pigments.

After finishing the base we started working on the Evzonas figure which was painted using mainly acrylics.
Starting with the uniform, I used the following order: Basic color: Olive Green + English Uniform. Shadow: I started adding black to the basic mix gradually until we can see the effect take place. For the Basic Lighting I added Olive Green to the basic mix and Yellow Green for the extra lighting.Then we move to the skin using the same process. Basic : Sunny Skintone + black + one part red, Shadow: English Uniform and black added to the base mix while for lighting I added gradually SunnySkintone.
Different red filters were used to blend the colors better.
Hair and eyebrows were painted brown. Last was the painting of the uniform insignia. The only modification I did to the figure was on the tassel of the figure. After observing some pictures of the real thing I liked it better being wider and richer so, with the use of some Magic Sculp I carved one from scratch which was painted with the Black set from Andrea together with the tassels on the Evzonan rustic shoes. Next in line for painting were the straps and the gun holster which were the only items painted with oils. I used Burnt Sienna and Burnt Umber. A light brown for lightning and black for the shadows. Last was the white in the “foustanela” the traditional Greek military dress where I used a mix from the White set from Andrea with some Khaki. For lighting I used the Light 1 from the set and for the shadow khaki +black.
I really enjoyed making and painting this subject and I believe I was successful in bringing out the authentic atmosphere of the era of the Asia Minor Campaign.