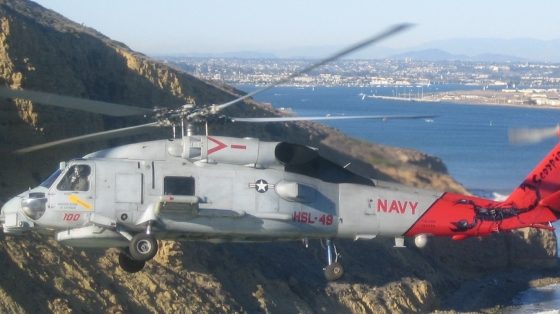 The Sikorsky SH-60/MH-60 Seahawk (or Sea Hawk) is a twin turboshaft engine, multi-mission United States Navy helicopter based on the United States Army UH-60 Black Hawk and a member of the Sikorsky S-70 family. The most significant airframe modification is a hinged tail to reduce its footprint aboard ships.

In early 1978 the Navy selected Sikorsky’s S-70B design, which was designated “SH-60B Seahawk”. The SH-60B entered operational service in 1984 with first operational deployment in 1985. It carries a complex system of sensors including a towed Magnetic Anomaly Detector (MAD) and air-launched sonobuoys. Other sensors include the APS-124 search radar, ALQ-142 ESM system and optional nose-mounted forward looking infrared (FLIR) turret. Munitions carried include the Mk 46, Mk 50, or Mk 54 torpedo, AGM-114 Hellfire missile, and a single cabin-door-mounted M60D/M240 7.62 mm (0.30 in) machine gun or GAU-16 .50 in (12.7 mm) machine gun.

As a co-pilot at this type of Helo in the Hellenic Navy, I had bought this kit a long time ago and just remained at my stock waiting the proper time to open it. Revell’s kit is actually Italeri’s kit from 2003 but with new decals (HSL-49 Sqdr). The surfaces have restrained recessed panel lines with raised rivets except the under surfaces (I cannot understand the reason) where the panel lines are raised. The kit also lacks obvious interior details but don’t worry Eduard has released detail interior/exterior sets. Personally, I decided to build this kit out of the box adding basic improvements myself.

Construction
To be honest, this kit proved to be a real troublemaker generally due to bad fitting problems. The first improvement was to rescribe the under surface panel lines. Then I improved a little bit  the interior by adding  seatbelts from Tamiya tape and improving the cabin seats/consoles using sheets of plastic. As for the exterior, improvements were made to:

Humbrol putty was used almost for the entire exterior parts (specifically at weapon pylons-main landing system) and then sanded carefully in order not to lose the raised rivets.

Another big problem of the kit was the clear parts of the nose section. The windshield was a bit smaller so didn’t fit very well and the pilot’s/co-pilot’s windows were too big for the doors so I fixed them by sanding the big ones and for the windshield by using small parts of plastic sheet and microsol’s crystal clear. Just to mention that all clear parts were first dived into Future.

I considered the torpedoes (Mk 46) of the kit not appropriate because of the lack of propulsion system so I changed them with a pair of Mk 50 (from my spare box) with better detail.

The HF antenna along the tail section was made by myself -as Revell didn’t include it at all-by using EZ line and small pieces of plastic.

Painting-Decals
Before getting started, the kit was first primed with Mr Surfacer 1000 grey (of course after masking the windshield and the cabin windows) and then I pre-shaded the kit using flat black and buff . I used Gunze acrylics for the entire camo except the tail pylon.

So, side surfaces were painted with H308 (FS 36375), upper surfaces with H307 (FS 36320) and under surfaces with H338 (FS 36495). For the tail, I used AKAN’s acrylic red (73058) because it’s brighter than Gunze H3 but first I applied a coat of flat white. The cockpit was painted with tire black (H77) and the cabin with H317 and H307 for the cabin floor. Wash for the interior was made with Dark Dirt (Flory models). As for the rotor blades, I used H307 and weathered them with different grey colours (H334 & H338). The leading edges were masked and painted with sandy yellow, the fin tips were sprayed with a mixture of RLM66 and one drop of flat black and the main rotor axis was painted with Alclad aluminium. Torpedoes were sprayed with Alclad aluminium, pale burnt metal, orange (Hu 18) and flat black.

For the weathering process I used the same technique with the rotor blades spraying sporadically different grey colours (H308+H334+H338). Then I applied a coat of gloss varnish in order to put the decals. Fortunately, I didn’t have any problems with them and also behaved very well with Mr Mark Softer. Just pay attention with the Scorpion decal because of his large size.
Finishing-Conclusion
After the decals, I applied again a coat of gloss varnish in order to prepare the surface for some wash and apply oil colours for a realistic effect. Revell doesn’t provide any internal engine fans so I decided to make FOD covers for the engines and APU exhaust using Milliput white.

For the wash I used Van Gogh’s Paynes Grey and for making leaks and dirt I used different shades of Naples Yellow and Raw Umber. For the tail pylon I also used Tamiya smoke to achieve the dirt from the engine exhausts. A coat of Mig’s satin varnish sealed everything in, and adding the HF antenna, main rotor blades in fold position (Revell gives this opportunity) and RBF which were printed by me at a high quality gloss paper, completed the model.

Despite the fitting problems, adding a few do-it-yourself details and with a large amount of patience, Revell’s kit comes to life and gives a very nice Navy Helicopter.

Photos and text by Alexandros Marinos