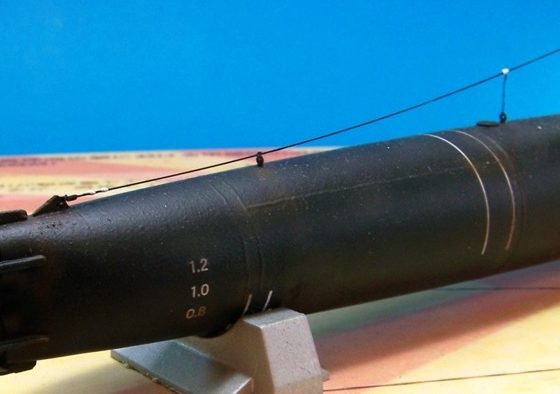 Those submarines were also called “tubes” (tou) or “target” (Teki, which is an abbreviation for Hyoteki).  It was common use to be named after their larger carrier mother submarines, i.e. I-16tou.

They were manned by 2 crewmembers and carried 2 torpedoes.

HA-20 never succeeded to enter Pearl Harbor as it was spotted by the US Destroyer USS Ward (DD-119) and was sunk with its crew at a depth of 400 meters, where it was discovered in 2002.

Likewise, HA-18 suffered damage from depth charges east of the harbor’s entrance and was abandoned by its crew, whose traces are lost since.  The submarine was discovered in 1960 and today is on display at the Imperial Japanese Naval Academy in Etajima.

HA-22 entered the harbor and launched its torpedoes against the USS Curtiss (AV-4) and USS Monaghan (DD-354), both of which missed their targets.  It was sunk by USS Monaghan and was raised a few years later only to be used as scrap filling material on the construction of the new pier.  It was unearthed in 1952 but the chlorine acid from its batteries had eroded it to such an extent, that it was re-buried on spot.  The remains of its crew is still entombed in the sub.

HA-16 was discovered only in 2009 at the entrance of the harbor.  This specific submarine entered the harbor and successfully launched its torpedoes with at least one of them hitting its target, the Battleship USS Oklahoma.  After the attack, it escaped and was abandoned by its crew in the western bay, called West Loch.  An accident involving a number of amphibious landing crafts In 1944 led t their sinking on the same area.  During their raising, HA-16 was discovered as well.  It was found with its torpedo tubes empty and its escape hatch open, indicating that its crew had abandoned the sub successfully.  Following the discovery, HA-16 along with the shipwrecks from the accident was dumped in the sea at the entrance of the harbor and the whole matter was kept secret until 1960.

HA-19 went ashore at the beach east of Oahu.  Its captain, Kazuo Sakamaki was taken prisoner of war, being America’s first POW of the second world war.  The second crew member, Kiyoshi Inagaki, lost his life under unknown circumstances.  HA-19 was used in tours in the continental US to raise War Bonds and is today at display in the National Pacific War Museum in Fredericksburg Texas.

Its captain, Kazuo Sakamaki, asked his captors to permit him to commit suicide, which was denied.  He spent the remainder of the war as a POW in USA, while the Japanese Navy had him stricken from their service records and he is like he never served…  Even on the “photo of the Heroes of Pearl Harbor”, showing all the submariners who took part in the attack, there are only 9 people pictured instead of 10…

The kit is from Fine Molds in the 1/72nd scale.  It comes in very few parts which fit relatively good.  The decals are for one vessel during the Pearl Harbor attack and two more for the Sidney harbor attack.  A type 97 torpedo is also included with 2 different war heads and a small base, but these were left aside.

The stern struts are not included in the kit, but there are detailed instructions as to how to construct them using metal wire.

A very small quantity of model filler was needed for the main hull, which has realistic weld lines as in the real sub.  After completion of the assembly, the entire model was airbrushed with a mix of acrylic NATO Black from Tamiya and Flat Black from Gunze in a ratio of 70% – 30% in order to break up a little the black color.  The double counterturning propeller was painted acrylic Metallic Brass from Model Master.

Next step, I airbrushed a coat of Humbrol Clear and applied the decals using Microscale Set and Sol.  The whole was then sealed with a coat of acrylic Matt Varnish from Italeri.

For weathering I used Rust Wash from Humbrol and two tones of rust and soot from the Tamiya Weathering sets.  Everything was sealed using again acrylic Matt Varnish from Italeri.

The two bases of the sub were painted with acrylic Metallic Steel from Italeri.  I order to give some more detail to the sub, I added a small length of chain at the front side of the conning tower, two “cables” fore and aft using thin wire of 0,2mm diameter, fastened to the hull in three points with 0,1mm brass wire.  The 4 ends of the 0,2mm wire were inserted in small cylindrical plastic tubes made of heated and stretched cotton swab.  The insulators were done using small amounts of common wood glue and painted over with acrylic Flat White from Italeri, as is the rear light on the conning tower.  The periscope was painted with acrylic Metallic Steel from Italeri and Smoke from Humbrol to represent the crystal on the opening.

For the base I used a large piece of wood on which I glued an adhesive vinyl picture which is a compilation of two different photos photoshoped form my good friend Themis Serbis (thanks’ mate!).  The first is a map of Pearl Harbor which was on the kit’s instructions and the second a “battered” flag of the Rising Sun, ensign of the Imperial Japanese Navy.