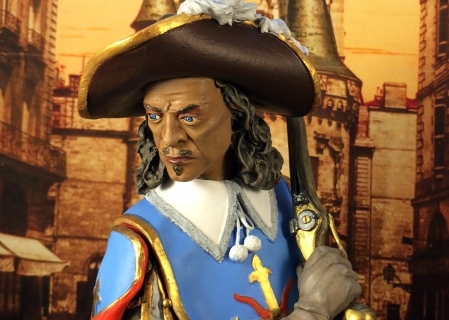 A short trip to Spain and a tip gave me the chance to continue my modeling journeys. I found on the internet that in Girona, where I would be for just 3 hours, lies the paradise of figures modeler, the company Art Girona, which manufactures figures and has in stock many figures of other manufacturers.

There, after 3 hours of choosing between many others (and no sightseeing Girona at all), I bought this particular fellow, “ΤΗΕ ΚINGS MUSKETEER-France 1650”, from Belgian “Pili Pili”, 1/9 scale. It represents a musketeer member of horsemen of King, formally known as “Company of Musketeers on horse”, which was founded in 1622, from King Luis XIII and disbanded in 1789 from French republic.

As this bust consists only from 6-7 pieces, the gluing part finished shortly, keeping some pieces like the pistol, to paint first and then attach to the body.

Uniform Blue created from sky blue and flat blue, in ratio 5/1. It’s true that I had to paint it several times and that this cross proved to be a real challenge. The cross was painted with gold of Vallejo, then black wash and pyrolle red light of  Winsor and Newton.

Base face painted with heavy skintone and washed with burnt umber. I painted shadows and highlights where the face is more vivid and in the inner areas. More lighted spots are nose, chin, cheekbones, upper area of lips and ears, darker spots down the lips and nose and wrinkles. Really moisty brush, several tints of same colors and much experimentation. In cheekbones base color with a little brown.

When I finished painting I used matt polish in uniform, except hat and brown in hands where Winsor and Newton acrylics where sharp enough.

After about two months of work, our hero was ready to shout “Un pour tous et tous pour un”.