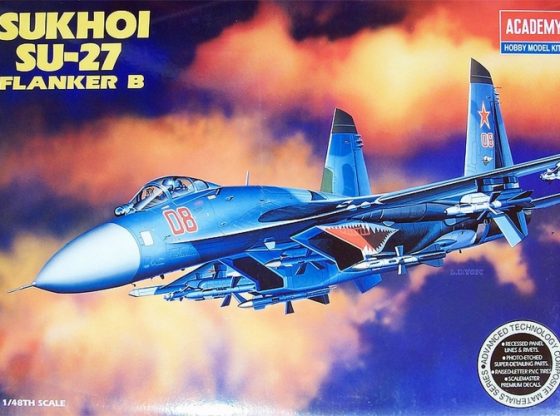 I believe that the kit is well known to almost everybody. Its quality isn’t something special, but I believe an experienced modeler can represent a realistic Flanker.

Being this Eduard kit in my possession, accompanied with the Ukrainian Air Force decals, I dared to build one Flanker having this impressive splinter camo.

I decided to be a plain and easy procedure, giving my attention to the camo and at the metallic parts at the rear, which I believe it’s the half of the work according to Flankers.

01. At the beginning, I sprayed the jet engine nozzles with Humbrol gun metal, while metallic powders of Ushi Van Der Rosten and Tamiya were applied at the end.
02. Secondly, in the cockpit the only thing that added was a seat of True Details.

03. The gun barrel was replaced by a piece of syringe needle.
04. Putty was applied beneath the air intakes.

05. Clears covered by the means of Tamiya tape and masking fluid.
06. The whole fuselage was basecoated with a mixture of Humbrol 47 and white. I started then to mask part by part the surfaces and spraying with the second camo color which was Model Master 1508.

07. 08. You can see here the fragmented masking, ready for the 3rd camo color, Humbrol 106. This way helped me to control and paint better the camouflage pattern keeping me relaxed, despite the huge airframe of the model.

09. Coming to the next step, all the progress sealed using a Gunze gloss varnish. Furthermore, at the final steps of spraying some panels lightened with 1-2 drops of white mixed with the varnish.
10. That was the moment I decided to start working on the metallic parts on the fuselage. Everything was masked and those parts basecoated with black Humbrol. After 24 hours I applied the Alclad Stainless Steel (Alc 115), insisting always at the center of each panel.

11. The result was really impressive; playing with the light I achieved a rainbow effect that was artistic but not realistic, in my opinion.
12. The surfaces of the model had to be smoothened in order to apply the decals, thus they rubbed slightly with Micromesh 6.000 etc. Using modeling decal fluid, the Cartograf decals lied on the surfaces perfectly following the curves of the model.

13. The model left two days to “rest” and then the camo and decals sealed with Gunze matt varnish.
14. You can discern the effect of the matt varnish on the metallic parts, the colors have been degraded. Alclad effect was entirely disappeared!

Finally, a mixture of Raw Umber and Black oil wash applied on the model. The glossy surface considered to be unnecessary to me. Metallic areas were restored using silver pencil, Ushi and Tamiya, making the effects closer to the reality.

In whole, the procedure lasted for 4 months, modeling slowly and without anxiety. As far as it goes…

You can see the final result by clicking here!