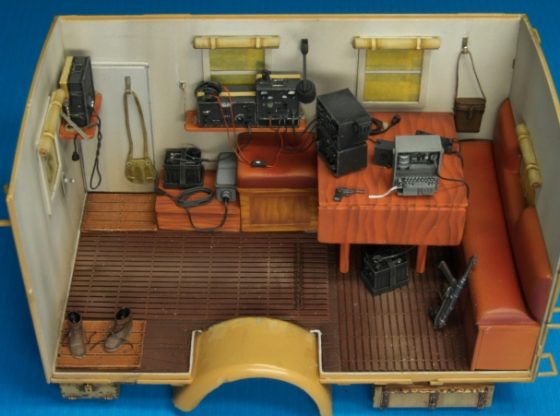 Designed in 1938, this truck proved to be a reliable and versatile vehicle. This heavy, 3 tons truck began its career by pulling a 2×4 traction and in later versions a 4×4. Only in 1940 entered its service with the military. The type ‘A’ used as a medium truck and has been modified to van (Einheitskofferansbau), having a variety of roles such as workshop, laundry, laboratory, ambulance, van, radio truck and more.

The radio version hosted powerful radio equipment and antennas, used by personnel to direct the artillery batteries, while the cabin was spacious enough to accommodate the staff that needed to work comfortably.

The kit is an old mould and its production now has been ceased. It has been desiged as a closed cabin truck thats why has no detailed interior, especially in the radio room. At that time, VERLINDEN released an aftermarket kit (code 1571) to overcome the problem of scratchbuilding the radio interior room, thinking that the kit was still available. Everything is included – the floor, the radio and other accessories- this modification made it possible to recreate a valid version of the radio room. ARCHER helped me to replace with transferible dashboard the instrumentation. Back to the kit now, paying atention to various pieces, I immediately realized that the contrstuction was not a walk. For example, the interior of the walls and the roof of the ‘room’ were full of enormous signs of extractors so deep enough to give a lot of putty to smooth out everything.

The chassis, in addition to the ejecting signs, had some big plastic recesses, making a big bulk putty to be a necessity.

While letting the the various Tamiya’s putty layers to dry, I begun working on the driver’s cabin. The interior parts have been painted entirely using Tamiya’s XF-60, while the monotony altered by the seat that was painted with various shades of red; darkened with black and lighted with yellow. The cabin sealed without gluing the transparent parts, putting adhesive tape in the gaps to protect the interior from the camo painting.

Meanwhile, the chassis was finished, smooth and ready for painting. So I sprayed both the cockpit and chassis using Tamiya’s XF-60 as a base. Ggradually lightened the color more and more to get the most exposed areas to zenith light. After the basecoat, wash and Streaking Gream of AK / MIG applied on the chassis. Then, using a brush and Vallejo colors, I accentuated the light/dark effect as well as I made the chipping with German Braun (very dark).

The same procedure was followed for the wheels, crossbars, engine and underneath the floor of the radio room.

On the roof I rebuilt a frame that acts as a carrier, made it with flat plastic filaments. By the means of a tiny copper wire i simulated the hooks to pass the ropes that secure the load.

It’s time to work the radio room. After covering all the holes with putty, I applied white Tamiya primer at the cabin. Then, with various shades of ‘dirty’ white I painted all the interior. The floor has been painted with dark brown and all the tranpsarent parts, serving as windows, glued on the cabin walls. Foremore, i covered the transparent parts from the inside using a Tamiya tape, to proceed to the next stage; the sliding window frames.

Italeri did not took into account the detailing of the innerterior radio room. There are no details on the walls, not even the sign of the doors, thus I had to rescribe everything to make them visible.

THE INTERIOR OF RADIO ROOM

The room is full of wooden parts like table, shelves and chests. These parts were made of resin from the Verlinden kit. Unfortunately, the table was so folded that I had to replace it with plasticard of the same thickness. The following phtos show the system that I used to reproduce the wood grain. The basic color was a mix of Tamiya XF-3 and XF-7, while their proportions picked according to how the base is preferrable, lighter or warmer. “Orange” color used as a base for the table. All changed when applied long Tamiya adhesive tape strings. I begun to spray with the airbrush a very diluted Tamiya XF-64 using low pressure, reproducing that way the wood grain. By moving the adhesive tape slightly downwards and slightly to the right or left, you obtain easily a different wood grain from the previous area that already been painted. It is preferible to cut different irregular strings of tape so that the vein of the wood will radically changes. The last photo shows the finished work and the difference in the wood tone.

Now is the turn of the radio. The resin looked like a swiss cheese, some parts had to be rebuilded, like the edges of each radio. After covering the holes and smoothing the surface, I started painting the radio equipment relying on photos found on a radio amateur site.

Fixing the radio equipment with special belts that included in the Verlinden kit was time to move to the next step, furnishing the interior.

I started to place the furniture, the radio and the photo-etched floor.

I placed the furniture and the board on the three sides of the wall, leaving only the fourth to be fit at the very last moment, but constantly trying all those dry fits to make sure that everything will match without having any surprises.Now with careful testing, I glued all the shelves on the 4 walls and it was time to connect radios, batteries, headphones, etc. with various filaments. I rebuilted the arms of the lamps because they were very thin photo-engraved! At the very end I added the various furnishings, hanging saddlebags, put the rifle, pistol and helmet while trying to create a ‘living’ environment, which unfortunately did not forget the war!

Note the shoes left loose at a corner.
After gluing the four walls I painted the exterior using the same color as the cabin. Then i connected the radio cabin to the chassis, painted some last parts like ladders and shovel.

The time for the telescopic antenna has came which is located at the back of the truck. The assembly was a menace because in Verlinden’s kit there were no real instructions, but only a written explanation of ‘how to’! I used my imagination accompanied with the ‘how to’ sheet to undrestand the path to the completion… Also, looking at the antenna rod, it was irremediably bent! To prevent various problems I used parts from both Verlinden and Italeri kits. At the end, after some modifications, the antenna put in place. Finally, I fixed the the cabin in its position. The roof, logically, is laying on top, permits you to take it off to see the interior of the radio room.

Photos of the finished model.

Working on this kit is not suggested for beginners. It requires a good planning of the various steps that go beyond the instructions. Detailing is crucial, because it is a must for a successful model kit. It was realy tough but at the end I was satisfied with how everything fit exactly, especially remembering when I opened the box for the first time…