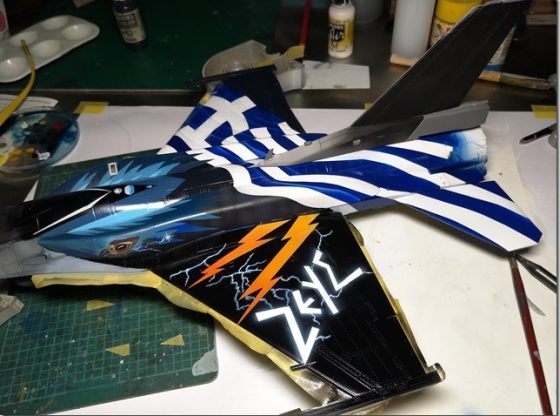 I decided on this project sometime back but it took me about 1.5 years to deliberate on it. And saw that a Greek company was selling decals of this plane and there is a Polish company working on it.
I noticed that nobody is printing anything on the subject in 1/32 and then decided to tackle the subject in 1/32 Scale.
I got in contact with Hellenic Air Force thanks to Giannis Pantos of I Love Scale Models. Dimitris sent me closed to 50 colour photos and some sketches for me to work on.
First thing I wanted to do different from all other guys is to have the MLU486 Travel Pod. I could not find any so, I decided to draw it out and have it 3D powder printed.

The tough part is to get a Sufa kit only to use the IFF antennae and the CFTs. The rest of the kit has to be junked. Once that is settled, I managed to get a friend who has multiples of Sufas and he participated in the project by semi donating the kit at less than half the price to help contribute to the project. Once I started building it halfway, I was in Taipei judging the largest competition there with 600 entries, and met an old friend, Young B Song of Young Miniatures. He offered to buy extra tree from Academy and ship the spare tanks over to me in Singapore so that I need not throw away the Sufa Kit.

First thing is to mix my set of colours that I need from Gunze Sankyo. All 6 colours are done with the 4 intermediate colours in enough quantities to cover 2 kits.

Then I got cracking on the conformal tanks. I edged out the colours then finally mark out a place to put the falcons in by putting a patch of white on each tank.

The blacks were marked out for the beaks and painting can commence after this with Vallejo paints. An outer glow of yellowish off white was sprayed over to form the outer outline for the falcon.

After 2 days I got the birds ready on both sides and I draw the blue outer glows of the electrical bolts and put in the sparks and trace the lightning bolts with white.

Then the CFTs were test fitted to the model and to make it stronger,  I added support ribs to the framework of the bodywork so that it can be glued in place later with ease.

Once I finished the CFTs, I painted the inside of the Engine Nozzle and advice was given by Dimitris Palassis of Hellenic Air Force that the HAF uses the engine with the carbon fibre leaves and not the metal titanium ones used in Japan. So I have to Carbon Fibre – RIZE it.
The internals were painted white and black and brown washes were applied to it. The external were coated with Xtreme Metal paints with Duraluminum, Pink and Blue Alminum and rubbed into the surfaces that were presprayed with Vallejo Dark Aluminum paints.

The effects were quite pleasing. So I decided to keep it and not alter it.

As the plane was painted over a normal aircraft leaving the bottom and front part of the plane untouched, I decided to depict the weathered look of the actual plane for the front and also mix pearl mixture into the paint so that it will change colour where light is shone on it, just like the real aircraft, so that the dark blue will become bright blue under flash conditions.
The fuselage was painted with 3 tones of grey interspersed with blotching. Rain marks were added and the bottom is washed. The warning line was masked and sprayed white and then over-sprayed in red.

The flag of Greece…

I plan to do the light to dark and then to light approach. So I ditched in the white all over the space that is covered by the flag. Then I masked out the places that are white in colour and ready the surfaces for blue.

The other half is spray extra dark grey as on the plane, black is not used.

One went the glass beaded blue. Sky Blue and dark blue is added to form the folds on the flying flag.

The flag lines were also continued over the CFTs.

The CFTS are dry fitted and the lines are further marked out and re-masked to match the body work with the CFTs. Once I am happy with the match. Then I started work on the whites having the continuity of the folds in 2 tones of grey.

Here the greys are finally done and matched to the blue strips and the folds as well run continually over the whole surface.

Some going back and forth was required to make the lines blend perfectly.

Then the outer glow in sky blue was sprayed on for Zeys followd by Zulu and Sigma which were masked and sprayed on.. Then the other 2 letters were sprayed in one by one. Unveiled, the Zeys with outer glow completed.

The lightning bolt goes on by masking out the area and putting a coat of white primer on it and then Orange and yellow goes on. I drew out the lightning bolts in pencil after the big orange bolts are done.

And last, the tail section. The matching lines of the flags needed to be done first. Then the lightning bolts halfway then the Zeys letters. These are done the same way as the wings.

Then the area of Poseidon or Zeys was marked in white and the painting begins with reference photos from Museum in Athens. Finally the toning is what I am happy with and I added in the lightning bolts done the same what as the micro painting dotting method as on the wing.

The other side is done very much the same way. Gloss coat and then taken outside to have it sunned. Notice the flag blue glowing in the light? Yes, the pearl effect going into work.

Photos taken without flash and with flash…

You can see the completed model by clicking here…