Alexandros in 200mm: Alexander the Great 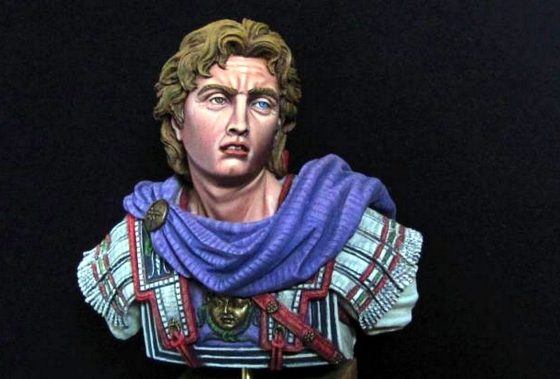 Alexander the Great is described that he had one blue and one brown eye, displaying the generally rare in humans phenomenon of heterochromia where the eye irises differ in color from each other.

It is also described that his head had a slight upward to and to the left tilt, probably due to an injury to his neck from a bludgeon, during the subsequent siege of the Illyrians’ castle in 335 BC, or as a natural symptom of scoliosis.  As for his height, he is generally described as being below average but muscular.

The color of his hair is described either as a light color, (according to Elianus, Julius Valerius, Libanius), or dark brown, according to the wall painting of the Battle of Issus found in Pompeii showing him with dark brown hair.

According to the above, the Italian sculptor Adriano Laruccia conveyed extremely well the tilt of Alexander the Great head.  I chose to paint his hair a more light color, while painting one of his eyes brown and the other blue for as the most convincing representation possible.

After cleaning the parts, removing the mold lines and washing the bust with soap and water, I primed it and started painting using acrylics.  In the process I used mainly Vallejo colors and some from Andrea.

Of course I started with the face, as it is the main feature of the bust and that’s where the viewer’s eye will first fall upon, (pic 1).  The base color is English Uniform and some Light 1 from the red set by Andrea plus some flat Flesh.  Followed by some light darkening to see where exactly we are going to emphasize and we start with the highlighting process which will be more intense as we are dealing with Alexander at the age of 30.  The mix is gradually lightened with the addition of flat Flesh in very thin and diluted layers while for the final highlighting we add a little bit of white in the mix.

After highlighting mainly the forehead area and around the eyes, areas on which usually the most light reflects on, (Zenithal lighting theory – light from above), we continue with shading adding darker colors and some Burnt Umber.

Next step, which is the most fun but also more difficult at the same time, is blending.  The goal here is to blend, i.e. to join one color into the other so that they do not have that sharp transition of color observed in the previous photo.  This is done by coating gradually much diluted intermediate colors of our palette as well as filters (diluted to a point almost like water) for the skin and some parts we want to emphasize (like the dark green or brown on the nostrils, ears, eye sockets etc).

Unfortunately the entire process is difficult to explain analytically with words and needs a lot of practice.  Watching various videos is also very helpful.

Next step is the eyes.  I mix flesh color with white for the white of the eye and afterwards I paint the pupils black in order to check if they are centered.  I paint the color of the eye, highlight the lower part and darken the upper, adding a black dot and finally a white one, maybe even two to represent the reflection of light on the pupils.

For the hair and eyebrows, I used Beige Brown and Burnt Umber for shadows and Ochre Brown for lightening.

The white color of the Linothorax was done with a mix of the whites set by Andrea and a tone of Khaki Grey from Vallejo.  I painted the red and green laces using three colors on each one, going from a light color (for highlighting) to a mid range one (as the base) to a dark one (for shadowing).

For the purple on the tunicle I used Purple, Royal Purple, Violet and some white.

Busts are a class of figures which literally teach someone how to paint and become a better figure painter.  Everything is large in scale and mistakes are easier to spot, but at the same time they are the most impressive and most enjoyable, to me at least, in painting!

I hope I offered some help!  Enjoy your painting!