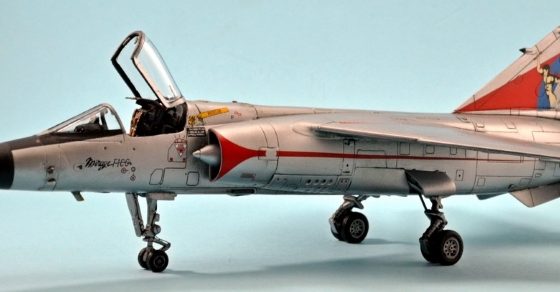 It is a single seat fighter and attack airplane, manufactured by the French Dassault Aviation. Dassault designed the Mirage F1 as the successor of the Mirage III and Mirage V.

Unlike its predecessors, Mirage F1 shared the layout of a swept wing mounted high on the fuselage and a conventional tail surface. F1 was superior despite the fact that had similar size to the Mirage III. It could carry up to 40% more fuel, had a shorter take- off run, grater range on low altitude missions and it was easier to handle it. The first Mirage F-1CG landed at the 114 Battle Wing on August 4th 1975. F-1s used initially by 342 Squadron while two years later by 334 All- Weather Squadron, having its base at Tanagra and Heraclion airfields, respectively. During its 28 years of service in the Hellenic Air Force, F1s flied for more than 160.000 flight hours, usually at intercepting missions. Retired on July 1st 2003, and 24 of them are for sale. (Reference: Wikipedia)

Relatively new and long awaited release by the Czech company, with a rich and excellent Cartograf decal sheet (3 hellenic versions), resin parts, extended weaponry (even for other versions), very good price and in general a kit that cannot be compared with the previous releases of other brands (old moulds with moderate detailing and developed panel line).

Coming at the construction face, I decided to choose the anniversary boxart version which represents the God ’’Talos’’ on the vertical stabilizer. Definitely, you will ask yourselves why I spent my money on that splendid kit and chose to build the anniversary version without using none of the hardpoints, weapons, fuel tanks that kit provides and present just a plain airframe? The reason is that I want to exhibit it at the 35th IPMS show, as a rare subject which will attract the visitors attention, but at the same time and because I own this kit at 1:48 scale, I thought that it’s better to pay attention on that in the future.

The construction lasted for about one month and a half, working two hours daily. Starting from the cockpit, Εduard (interior-exterior) pe set has been used, cause Special Hobby’s cockpit was relatively poor (instruments coming as a decal). I discovered the first drawbacks of the kit when I sealed the fuselage. Nosewheel bay is not fitting correctly, cutting off the alignment pins was a necessity, while the cockpit was fitting forward that it should, leading to a gap at the rear. Many dryfits attempted to put everything in place, making this step a serious trap for a beginner. The instrument panel is longer than it should (except if I misplaced it) so I rubbed its lateral walls, to place the windscreen correctly.
Working further on the model, my initial enthusiasm was ceased. The panel line on some parts is rather shallow, on other is deeper while on other is missing at all. The nozzle’s thickness is varying round it’s perimeter making that part not the strongest point of the model. After sealing the fuselage, I cannot say that I was really satisfied from the fitting. On various reviews that I consulted, I discovered that the kit was problematic and its fitting is referring as acceptable. At the end, I realized that the truth is somewhere in the middle while the modeler’s experience is a key factor! Putty was used to cover some small gaps, as for the rubbing was here to stay (particularly for metallic finishing in order to eliminate the joins).

Letting behind the fuselage, I carried on by gluing the wings. This step needs much attention to glue them correctly in order to achieve the right angle. Small gaps that occurred sealed with liquid putty. By placing the pe parts exteriorly (Eduard exterior), improves the kit’s detailing by far. Some panel lines needed rescribing after rubbing. A cautious stage is the placing of the intakes (many dryfits) to avoid the ‘step’.

Unfortunately the pitot tube comes with the cone, while someone has to pay a great effort not to brake it until the end. I didn’t made it and broke it several times and at the end I replaced it with a metallic one. The panel line that derives from the cone and the fuselage join is something that you cannot find on the real plane and needs special attention and effort to erase, taking care not to destroy the curvature on that area. Put some weight (the instructions are not referring to that) inside the cone or else the model will be about to take off!

Landing gears are good detailed and it is preferable to glue all the parts together before paint them, to achieve the best result. I’d like to state here that if someone decides to build it in flight position he has to think about it twice because the wheel doors are slightly larger than the bays (probably, that’s why this choice is not included in the instruction sheet). Talking about the wheels, they are unacceptable, that’s why I chose the CMK resin ones which have excellent detailing according to their scale.

Time to move the plane to the paintshop. The real one has never been flown while “wearing” this camo and painted silver (it wasn’t bare metal) except the cone and the antiglare areas. Gloss humbrol primer was applied and followed by alclad aluminum. Unfortunately the color was running low in the container (something I forgot to think about) and many fillings dropped on the model, especially on the ventral surfaces. I was in shock… and ended up to rub once more. Most of the fillings removed by the means of a micromesh sanding, but to do the job right I had to reset the painting process, something that has been avoided due to limited time. On the other hand, rubbing with the micromesh, made the surfaces too shiny, something that is not applying to the real one. To remove this effect, I decided to shade it a little bit, by airbrushing it with clear keeping a relatively big distance.

Light pinwash made by Mig blue black, antiglare area painted using gunze black and sealed with matt varnish. The vertical stabilizer needs extra precaution to apply the decal correctly. Satin varnish has been used for the red parts and matt for the azure ones. Finally, for the nozzle I used Μodel Μaster magnesium. The decals have been set really good and by using Mark Softer the film marks disappeared. Further weathering has been avoided because as I said before the plane never flew “wearing” this camo.