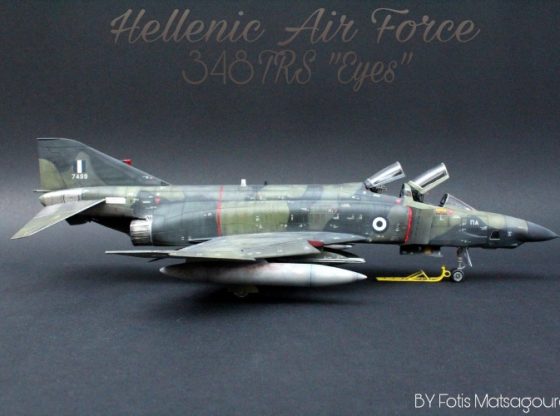 I started this Phantom having in my mind to make it as realistic as possible. So, i took the Hasegawa kit in 1/48 scale and added following improvements: engine exports, cockpit + eject, flaps + slats. I would say that the kit parts fit great with each other, so the construction was really smooth. What neede more effort, was that I had to cut the flaps and slats from the beginning so that the new enhancements could go. Also the cockpit had a perfect fit with the rest of the kit, and i did some of my little extras, extra cables, etc. I re-curved the lines of the aircraft and the rivets so that I could give a real representation of the aircraft lines. Concerning the landing system, some extra cables were placed to make it as realistic as possible. For the painting of the aircraft I used Gunze acrylic paints. I wanted to show off the damage to the aircraft and so I did some lighting at some points … The “dirt” on the wings and across the fuselage were worked with a brush and AK wash. For the tanks I chose the “lac” technique to make their damage more plausible. Then I worked with AK brush and “oil” to make the fuels that have run as real as possible … The exhausts were painted with Alclad2 metal with three different colors. The decals and stencil used are by Icarus. Finally I Gunze varnishes.