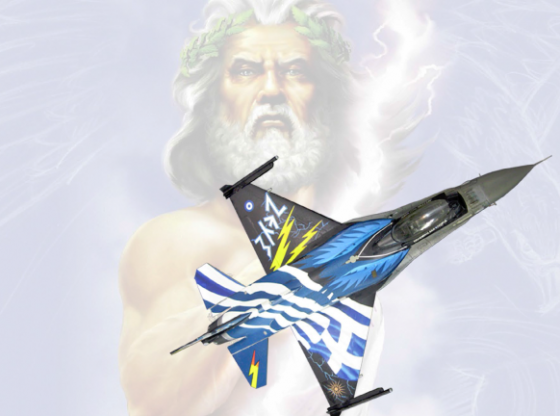 This is the only description someone could give to this specific paint scheme and what I (and all of us), felt seeing it!  (Oh yeah…  after I struggled to reproduce the decals for the “Zeus 2” paint scheme, I saw a photo of the new one…).
Of course I started looking for photographs, information, details etc of the new “Zeus 3” in order to make its decals.
Approximately one and a half month was spent (mostly at nights), to reproduce the drawings in Corel with a lot of test prints for the right measurements until I managed it. So with great pleasure I present you the first ever “Zeus 3” to scale…

The kit.
Lets start with the kit, which is from Tamiya, (the N, the so called aggressor), not for any particular reason, but just because that’s the one I had available in my models stash.  With the annual IPMS contest just around the corner there was simply not enough time to order and purchase the Kinetic kit, which is a copy of the Tamiya one, but includes EVERYTHING necessary to build a Hellenic Air Force F-16.
For the CFT’s, (Conformal Fuel Tanks) on top of the airplane I used some spare ones I had from a Hasegawa kit.

Construction.
Construction wise there were some problems, although someone would expect that a 55 euro kit from Tamiya wouldn’t at least have any fitting issues.  There were issues with fitting the air intake and the wings to the fuselage and the forward part of the nose.
I started with the cockpit where I spent quite some time.  I painted the best I could all the little details using a thin brush and a toothpick for the various switches.  Next I spent some time with the air intake, which I painted following the filling with plastic paint method (see the tip at the end of this article).
I finished up the rest of the build following the instruction sheet without any aftermarket sets or any further extra work.

Painting.
While I was waiting on the decals, which were printed directly on paper and the film was applied above it, (this was done due to my profession) I primed and painted the model to the Ghost camouflage using Akan colors.
Next, I masked the top, the CFT’s, the rudder – to which I added the extension for the parachute, absent in the Tamiya kit – the main wings, the tail wings and the small stabilizers on the belly and sprayed 2 coats of Gloss White by Gunze.  (TIP:  if you have an airbrush, since white is a “difficult” color, use the white directly from the bottle, add just a LITTLE bit of thinner and spray at a higher pressure).

Afterwards, the entire model was coated with 2-3 coats of gloss varnish in preparation for the washes and the decals.  I used the Black Dirt wash from Flory Models which gave me excellent results, limiting weathering to a minimum and only on the panel lines, since the aircraft due to the current usage has been washed and cleaned thoroughly.
There are very few decals that are applied on the underside of the aircraft and so I proceeded in masking off the white areas and adding the “Have Glass” covering, present on EVERY F-16 block 52, (the block 52M of the HAF 335 squadron are still “clean”) which make them look almost black-silverish and dirty.
5 parts of glossy varnish, 1 to 1, 5 parts matt, 7-10 drops (at the tip of a toothpick) black and 6-7 drops aluminum.  All of the above are of the same base and the same manufacturer for better results.  Stir thoroughly; add a little bit of thinner 9of the same manufacturer, for obvious reasons) and spray from a distance of 20-25 centimeters, 1-2 coats and according to the result. A photo in hand will help a lot…
A nice trick for more realism is:  with the same mixture but adding a few more drops of aluminum, apply it to the panel lines first.
This was followed by placing the decals of the central decoration which were neither simple nor difficult.
I did some touch up’s  where necessary, assembled the pilot’s seat, which on the real airplane has a black head rest with fur, (ok, I didn’t have the time to make it, since the model was completed on Thursday October 1st to Friday at 12:30 pm with the delivering of the models at the contest already in progress).  As a matter of fact, any observant saw that the HUD is upside down, (night modelling results…).  A soft dry brushing with Light Gray unified and highlighted the details of the cockpit.

One last coat of matt varnish on the decals completed the final finish.
I spent a lot of time on the exhaust, painting the inside of the covering plates of the Variable Exhaust Nozzle Actuators with a mix of Light Brown and Cream in order to have as much as possible the characteristic color of the real ones, which are ceramic and the outside with a mix of Revell #9, Matt Anthracite Gray and just a little bit of Model Master / Testors Magnesium Flat in order to represent as best I could the appearance of the actual covering plates made of Kevlar.  I airbrushed various shades of burnt metal colors and dry brushed the inside to get the result I wanted.
So simply and following the kits’ instruction sheet, the model was completed.

The real “Zeus 3” is an inspiration and realization of Alex Kontiveis and Dimitris Palassis.  We thank them both and all others unknown to us who worked on the creation of this beautiful AIRCRAFT!

Tip: Assemble the air intake and plug the lower part using tape, plasticine or any other way you find suitable.  After making sure that there won’t be any leaks, fill it up with ordinary plastic wall paint, (white), preferable satin.  After 2-4 minutes, empty most of the paint and rotate the intake around slowly until the paint is dry.  That’s it!  We have a perfect intake and not even filling is needed.  A coat of gloss varnish might be needed at the end.

HAPPY FLIGHTS AND ALLWAYS KEEP US PINNED DOWN WITH YOUR MANOUVERS ZEUS…!!!