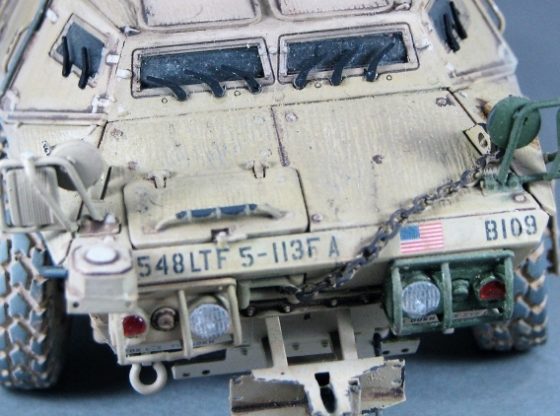 This Trumpeter kit was a merely out of the box constriction. The wheels have been replaced by the New World Miniatures resin ones, which are not recommended due to its wrong fitting and somebody has to convert a little bit the kit. Furthermore, Duke’s system antenna added from Blast Models kit. The Rhino apparatus is Legend’s aftermarket and its base is scratch built. The rest of the antennas made of copper tubes and the acoustic device from plastic. Both scratches are made based on photos of the real vehicles.

Model Master’s US Sand Gulf War applied on the kit, while later AK 122 OIF Sand sprayed from distance to represent the real tone. Next, AK oils used for the weathering effects. At the end thinned Tamiya Buff sprayed at the lower parts of the vehicle.

The base has built up on a photo frame, using balsa wood and filled with OASIS Foam.

The road made from cork sheet, processed and painted in a manner that represents a worn tarmac. Jersey barriers created from plaster using Meng’s mold, worn and painted usinv several acrylic colors. Finally, the palette made off balsa wood, while the rest came from the spares box.