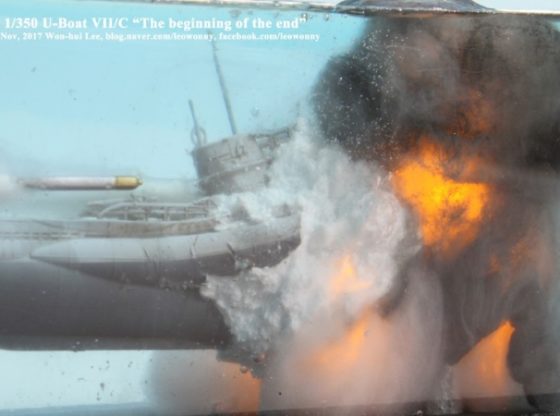 Hitler’s U-boats achieved to drive Winston Churchill into the corner at the early stages of the war, but when the allied forces acquired Enigma, a long journey of defeat had set up. That meant Hitler’s end.

I refer to the underwater explosion of the movie “U-571”. I don’t know many things about conflicts between submarines during World War II. I don’t know as well how many submarines sunk by torpedoes. But I wanted to highlight the dramatic effect through hyperbole.

Because as a model, the submarine is very simple, it is shunned by many people. Moreover, 1/350 scale U-boats are less popular because of their size. But I would like to note that models’ detail and size is not the most important factor. Many people overlook this… I hope modelers will keep in mind that both model stories and builder’s emotions are major elements of a model. A model can save life through stories.

Many people are curious about the build process. I just used epoxy resin, no special techniques. Furthermore people wondering why my model is not melted in high temperatures of the epoxy resin, asking me what kind of products am I using. What I use is epoxy resin for waterproof floors, not for modelling. And the product is being sold only in South Korea. However, I am sure that there will be similar products in other countries also. Typically, the mixture of epoxy resin is 2:1. But I am mixing up to 2.4:1. Doing so, reduces the temperature of the generated heat. It prevents the kit from melting. When the solutions is mixed, I add enamel paint (Clear blue, etc 0.5-2 cc). You do it to see if bot epoxy resin and hardener have been well mixed. If not, epoxy resin is not stable.

Cotton and plastic rod was used to make the torpedo. Adding cotton to the epoxy is nothing special. What matters, is how much of the product I can use, rather than what I use. It is something that can be obtained through repeated experience. When people ask me what kind of products I use and how I make them, I recommend them a number of repeats and attempts before somebody can use something. If you don’t try it, you would not understand of what I’m talking about.