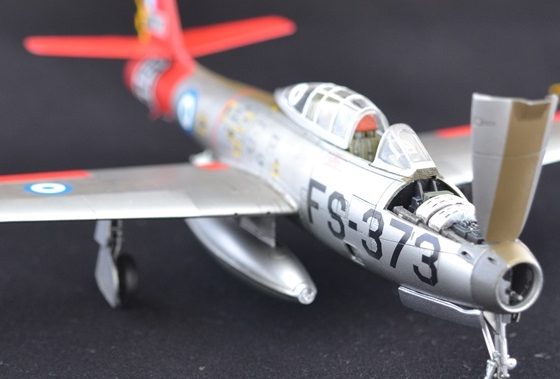 The kit:
For the construction of the model I used the superb kit from Tamiya in the 1/72nd scale, which comes with a very nice and impressive decal sheet for two USAF aircraft, an excellent – for the scale – cockpit with an embossed instrument panel and decals for the seat belts of the pilots’ seat.
Perhaps the only negative in my personal opinion is that it offers no external loads but only two external fuel tanks.  But nevertheless it offers the machine guns with the option of open or closed weaponry bay doors for anyone who wants to demonstrate even more the interior of the aircraft.

Building and Painting:
With all that stated above about the kit, I think that its understood that the construction was entirely OOB, without any additions, even for the seat belts I used the decals provided in the kit.  Excellent fit in all stages of the construction with minimum use of liquid putty at the wing roots.  I have to mention at this point that I added some weight below the weapons bay to avoid unpleasant surprises at the end of construction.

Moving on the painting of the model, I applied a coat of Humbrol Gloss Black (21) as a primer, essential for applying Alclad colors.  For the base color in order to replicate the bare metal, I used Aluminum and for the leading edges White Aluminum.   My effort for paneling by masking and using at selected points Dark Aluminum didn’t pay off sufficiently as with the final washes, approximately 70% of the effect was lost.  For the red and yellow areas I used Gunze colors having applied a coat of white directly on the Alclad beforehand in order to highlight these areas for the colors to follow.  The antiglare area was painted with Olive Drab, the cockpit and landing gear wells with Interior Green and the top part of the vertical stabilator with Light Grey (H307).

For the wash, I used for the first time the Blue Black PLW (Panel Line Wash) for metallic colors by Mig and I liked the result quite well.  I did some weathering in selected areas with dry pastels and oil colors.
The decals are from Icarus, which reacted perfectly with the softer by Gunze.
Finally I have to mention that in order for the decals to be applied correctly, I airbrushed a coat of Gloss Varnish in all areas with the exception of the areas painted with Alclad.  In order to seal the decals, I applied a coat of Satin Varnish.