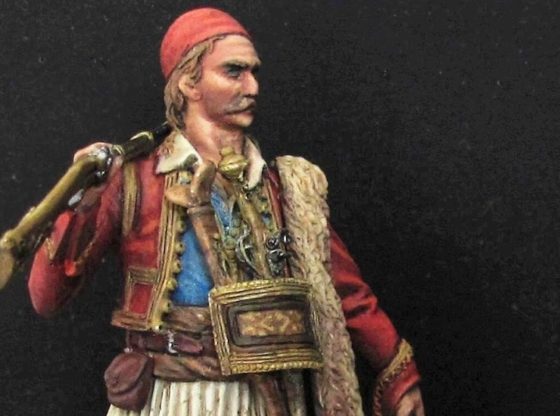 A great number of Greeks fought in the resistance against the Ottoman rule…  Among them stand out the “Kleftes” (thieves), who usually lived in the mountains, but also the “Armatoloi” (weapon carrying troops), although appointed by the Turks, often helped the Kleftes.

The Kleftes lived in the countryside and had their lairs in inaccessible areas. They were organized into small groups, each with its own captain and their own battle ensigns.  A key feature of the Kleftes was the hostility they felt for Turks and generally for any authority, which made them loved to the people.  Thus, they became a symbol of the resistance of the enslaved Greeks against the invaders.

In order to deal with the Kleftes and restore security in the countryside, the Ottoman Turks used armed Greeks, who were former Kleftes, the so called Armatoloi.  However, the Armatoloi, although they were auxiliary troops of the Turks, usually collaborated with the Kleftes. Thus, many Armatoloi, especially in the last centuries of Ottoman rule, were abandoning their posts and joined the ranks of Kleftes.

Gradually and until the beginning of the liberation struggle in 1821, the Kleftes, along with the Armatoloi were the only military force in Greece that could successfully fight the occupying Ottoman forces, thanks to the successful implementation of guerilla warfare.

The figure is from a Greek company which no longer exists, “Athens Miniatures”, thus a collector’s item.  It is sculpted by Babis Stathis.

Any procuring mold lines are removed from the figure with the use of a dremel rotating tool and sanding paper, (this one needed very little work) and all the parts are washed with soapy water.  Next step is to prime all the parts and glue the ones that won’t obstruct our painting procedure. For bigger attention due to the weight of the metal figure, I inserted metal pins at its legs and glued them to its base for maximum stability.

My original thought was to paint it in such a way as to highlight its stout-hearted man stature and at the same time combatant. Starting with the white color of the “Foustanella”, (the traditional skirt-kilt), which, besides the demanding color, is also a difficult part that stimulates interest in the figure.

Historically speaking, the Foustanella was not white in color as it was used, in addition to the battle, for the cleaning of weapons, wiping the hands of fighters etc. so it can easily be imagined that it was quite dirty

Next step was the red color of the waistcoat and the tarboosh.  I used the Andrea set again, for red colors, adding to the mix some Vallejo Reddish Brown and Black Red.  These were used for shading as well, while for lightening I used Vallejo Ochre Brown and Skin tone.

All gold parts were coated with Scale 75s’ set, in particular with Sahara Yellow, Light Yellow and Gobi Brown and a light coat of White.

For the long-haired handmade blanket I used a mixture of White, Khaki and Brown, (Vallejo US Field Drab and Beige Brown), darkening the mixture with Mahogany Brown and Burnt Umber in order to give a more dirty and weathered look, while lightening in places adding some white in the mix.

Finally for the belt and the weapons I primarily used various light and dark Brown colors, while specifically for the wooden parts of the weapons I used Natural Wood and Golden Ochre.  For the silver parts I used Citadels’ Boltgun Metal, which I find exceptionally good, darkened in places with Smoke.

Painting of this – out of production – specific figure was rather enjoyable, as it is superbly casted and favors the experienced painter.
The subject is characteristic of the great in-depth Greek history especially in a period during which the new Greek nation was formed after many years under the Turkish yoke…