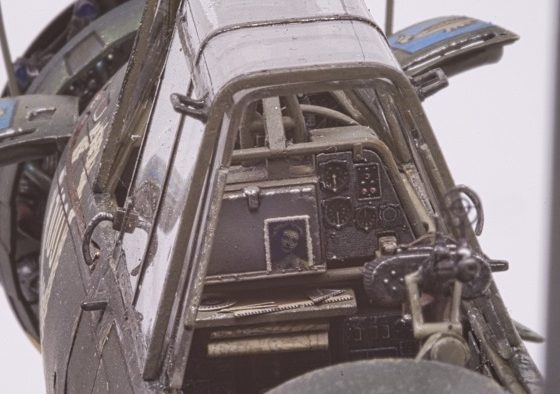 Revell released this model in 2010. New molds and a very affordable price make up for a very interesting subject.  Although the model is very good straight from the box, I got some aftermarket “goodies” for a greater result.  More specifically, I used Eduard’s Big Ed set, the Exhaust and float rudder set by Quickboost, seat belts by GW models, barrels by Master and the excellent canopy by HpH models, which replaced the one from the kit, the only part of the kit that is problematic, as it comes in many pieces and requires a lot of gluing on clear parts.
The model came together nicely and was riveted using the very good plans from Kagero publishing and their relevant publication on the Ar-196.
The model represents an aircraft operating from the Battleship Tirpitz in 1943.

All marine operated aircraft at the time were painted with RLM 65 for the under surfaces while the upper had the well known German camouflage, but using RLM 72 and RLM 73 to distinguish them from the classic Luftwaffe paint scheme.
For the RLM 65 I used Gunze and Akan colors.  Unfortunately the RLM  72 & 73 haven’t received the attention they should from the color manufacturing companies.  After some research, I decided that the closest shades were from Xtracolor, lightened with 5% buff and 5% RLM 04.
Extra care should be given to the assembly of the floats with the main body of the airplane.
I coated all “metal” parts of the aircraft with Flat Gunze varnish, while for the “fabric” parts I used the varnish by Marabu to give the impression of the two different materials, as the later one is a bit “thicker” hence a much more matt result.