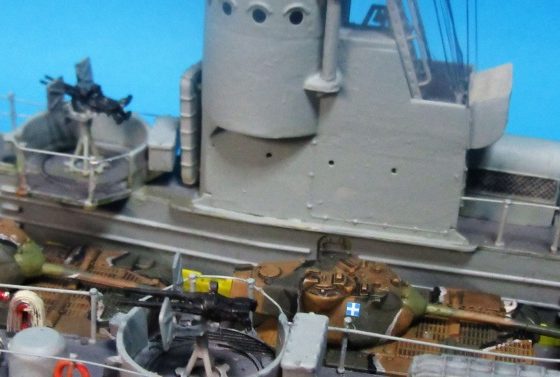 Revell released two kit for the L.S.M.-1.One kit, the 05123, referring to the W.W.II U.S.N. ships, and the other, 05139, referring to the D.K.M. ships.
The German ships, and kit, have some major differences from the early U.|S.N. ones.
Different bow section, bridge, mast and aft section (one of them with a helipad also) and no 20mm guns. But they have the 40mm on the bow.
The W.W.II model, has the 20mm guns, but singles, and no 40mm. This model was built combining both kits, and that’s because the Greek ships looked like the U.S.N. ones but had the bow of the German kit.
Also the Greek ships had a glass framed closed bridge so this is something more to deal with. So, using the 05123 as basis, i built the bow sections using the parts from 05139. I also transformed the bridge to look like the H.N. one, using transparent plastic sheet and square rods. One other job, had to be done, is the transformation of the single Oerlikon guns to twins.
Finally with the help of the, very few photos, some additional railing on top of the bow doors, and some extra vests were added. 3XGMC,3XM-8 Greyhound, and 3XM-47, all served in the Hellenic Army, were painted in the early ΄80’s camo and “parked’’ in the cargo area.

All vertical surfaces were painted with enamel, Humbrol 128,while horizontal surfaces with Gunze H331. So any corrections needed was easy to do.
Studying some  crew at rest photos revealed some extra details, except the extra life vests, such as the yellow bank in the cargo area, the red fire stations (Revell suggests grey) etc
Letters and numbers were taken from Superscale 72-214 sheet, insignia on the tank turrets from LM decals .

So is it worth it to waste 2 kits in order to have one? Of course it is!  With cost for both kits similar or even lower as a 1/350, why not? After all the final model is a Greek ship, not hard to build.
My model represents the ships before the modernization that, maybe, happened sometime in the early or mid ‘80’s, just because most photos I had showed the older type mast. But if someone wishes the parts needed for a modernized ship are there. In the 05139 kit. New type mast, new type (barrel look) life rafts, antennas new funnels (I wasn’t able to spot them anywhere though) etc.
Just for the record, Revell releases also in 1/144 two sets with the vehicles only. These are the 03350 for the WWII and the 03351 for Bundeswehr. Each set includes three vehicles of each type

Thanks for reading, hope you liked it!