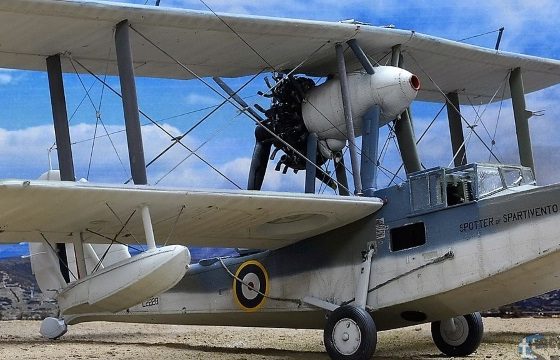 The Supermarine Walrus Μκ ΙΙ kit is a recent product that hit the market in 2017.  My first impression of the kit was its large box of excellent quality and thick cardboard which could easily pass as a …safe!  The kit consists of 157 pieces of thin gray plastic, distributed in 5 frets.  The engraved detail has an ideal depth while the rivets on the fuselage are very thin.  The interior of the fuselage has extraordinary detail all over and only the very demanding modeller would ask for something more, easily found at an aftermarket set by Eduard.  The 9 clear parts come to a separate fret and are very thin and have a very good transparency.  The kit offers 8 simple drop bombs and depth charges plus 3 machine guns, all with very good detail.  The only down side of the kit are the numerous ejector pin marks in the interior of the fuselage which are visible from the outside and have to be removed.  There are two different choices for the wheels, weighted and non-weighted and separate rims.  Finally, for the wings we have alternative parts which can be glued at the open or folded position.  The decals are for 2 British and one Australian aircraft and are very well printed. The 24 page detailed instructions booklet breaks the construction in 108 building steps.

The built
I started with removing the ejector pin marks from the interior of the fuselage, sorting out all kit parts and adding some detail with aluminum foil and plastic.  As you can see on the photos, I build the supporting bases for the photo cameras, the frames for the side windows in the open position, the perforated plates on the round entrance hatches and various little details based on photos of the real aircraft.
I used Humbrol #78 Cockpit Green, for the interior color, taking much care at the joining points of the 4 fuselage parts during assembly, although they fit very well together.   Only a small amount of putty was used at the underside.  I chose to glue the clear cockpit parts at a different position, contrary to Airfix’s all open suggestion.  I assembled the engine cowling and its struts and added the strings using thin fishing line.  For convenience and proper tension of the wing strings and given the very good fit of all wing parts, I followed an unusual method of gluing them in place.  Initially I glued the engine cowling and upper parts of the lower wings, with their struts, to the fuselage followed by the top wing where I glued all parts except of the upper wing part.  By consulting the corresponding construction of fellow modeller Megas Tsonos, published on Air Modeller magazine #77, Megas says that the 8 main strings have a flat rather than a round bisection.  To a widened metal tube, I glued vertical sprue parts and on them I stretched 3 lengths of fishing line and super glued them together.  I sanded the entire assembly with sanding paper for the final widened shape.  The overall length I needed was 90 cm.  I used thin wire from a TV antenna cable to represent the lifting cables of HMS Sheffield, positioned at the central part of the upper wing and left them aside to be installed towards the end of the construction.
I decided to add some more detail to the already very detailed engine, in order to enhance its appearance.  Therefore I made the exhausts using 1mm wide soldering wire.  The stabilizing beams for the plates which guide the air for cooling of the cylinders were replaced by thinner plastic parts by Evergreen.  I added sparkplugs wires using thin metal wire and the rocker arms of the valves on the cylinder heads.  Using masking tape I made the collars to the intake ports.  I painted the engine with Mister Hobby H-77 Tire Black and various darker metallic tones.  I trimmed down the blades using my hobby knife and sanding paper to make them thinner and painted them Satin Black with Yellow tips.  I fitted the propeller to a rotary tool and adding drops of Oil from Mister Hoppy with dark oils to the blade bases, I rotated it in order to reproduce oil leaks from the engine.

Painting and Decals
With the model half-build at this stage, I airbrushed all lower surfaces – glued or not – with Mister Hobby H-338 Light Gray.  The upper surfaces of the lower wings were airbrushed with Humbrol #31 Slate Gray and Mister Hobby H-331 Dark Sea Gray.  The upper surfaces of the fuselage and top wing were airbrushed with Humbrol #224 Dark Slate Gray and Mister Hobby H-42 Blue Gray mixed with Medium Gray at a 80%-20% ratio.
I coated all surfaces with floor polish and placed the decals, which are very thin, with a help of Mr. Mark setter.  Once everything was dry, I highlighted all the panel lines with a wash of Black, White and Brown oils thinned in white spirit.  The recesses of the fabric surfaces were coated with thinned Tamiya Smoke.  The corresponding reliefs were highlighted with light colored, (and matching tones) oils and dry brushing.  I weathered the fuselage around the engine with oil leaks from thinned oils and white spirit.
I glued the cables in place using super glue followed by the upper part of the top wing, the strings, the engine and the propeller.  The entire model was coated with AK matt varnish.  Finally I added all small pieces and antennas.

Conclusion
Airfix’s Walrus is a very good example of how to build modern kits.  Leaving aside the 4 fuselage halves which need some extra caution during gluing and a bit of putty, the rest of the model more or less comes together “by its own”.  The inner and outer detail is very good and only the very demanding modeller will add more scratch build detail or buy some aftermarket sets from Eduard.

If you want to build this “ugly duck”, the choice of this kit is a one-way.