Diorama in 1/35 scale: The last letter 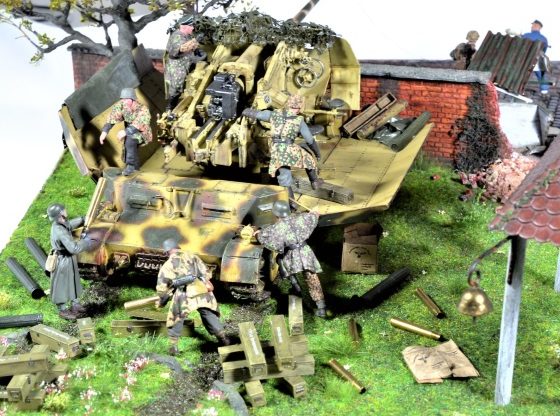 After a long time I finished a dιοrama with many constructions from 0.The image shows one of the three tanks that have existed, and now defends a city in the last state of war, along with a number of units that are the last forces and reserves. Some are being prepared and supplied with ammunition, an experienced soldier gives the latest instructions to a young man from HJ and a old man from Volkssturm. And a soldier is reading, perhaps for the last time, a letter. The officer in the tank shouts the soldier, and a little dog looks at the soldier and perhaps he hopes for some food. So I decided to name the diorama ” The last letter ”. The scenery is rainy and the waterproof show a different tone and is the difference in a green natural environment that is in contrast to the other side of the wall where it is the side of human activity. Many elements such as the car that was not burned all over the rain, and the half-broken kiosk add to the picture so there is not a simple straight environment. Wanting to escape from the usual scenes with ruined buildings, it is a simple but also difficult with many constructions that ultimately give us the joy of construction beyond ordinary kits.