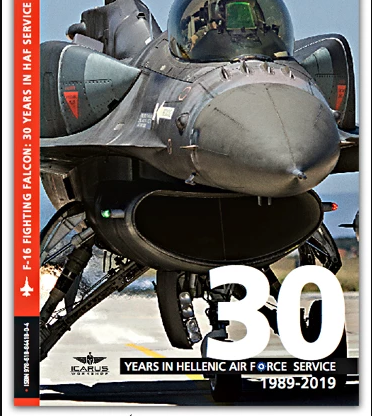 Everyone who associates with this wonderful hobby called static modeling, has the habit of collecting books besides kits. Books about the subject that we build every time. Historical books or books about a particular aircraft, armoured vehicle, ship etc. Through their pages we travel, admire the photos and learn about our favorite subject.

A book from the above categories, recently came into my hands. It was the F-16 FIGHTING FALCON: 30 YEARS IN HAF SERVICE by ICARUS WORKSHOP. A book that should be in everyones library, even if you are a modeler or a fan of the aviation ideal and especially of the Hellenic Air Force.

s the title of the book foretolds, it is a tribute to the 30 years of the F-16 Fighting Falcon in the Greek skies. The operation of the aircraft that forms the backbone of our Aviation unfolds in front of us through 160 pages and over 300 color photographs by both Greek and foreign photographers. The book is written in English so that everyone around the world can enjoy reading it.

In the book we can find information about Battle Wings and Squads equipped with this aircraft and their roles..

But let’s take it from page one, the day the Hawks landed in Greece. The book begins with the equipment programs which the aircrafts were purchased and even reaches at the upgrade agreement to Viper version.

Moving on, we have references to the Fighter Wings and Squads equipped with the Falcons. Here we can find information about which type of aircraft equips each squadron and the combat roles these squadrons have. We also learn the type of weapons the aircraft carry to serve the role of each Squadron.

It goes without saying that from a book on a specific aircraft could not be missing references at the armament of that aircraft. There is reference to all the armament that an F-16 of the Hellenic Air Force can carry.

Extensive references with rich photographic material can also be found about the F-16’s School of Tactical Weapons and Icarus (trainee pilots) Training. Following we have the exercises that the Air Force participates with the Falcons where the distinctions came one after the other.

ZEUS makes its presence felt strong, as there is a chapter on the F-16 “ZEUS” DEMO TEAM. The aircraft with many distinctions that makes us proud to see it on air shows doing its stunts, is an integral part of the Air Force.

And because we are modelers besides aircraft and Air Force lovers, Icarus Workshop has many goodies for us.

Through the pages of the book we can find details such as the colours of the GHOST variant given in FS codes, the specially painted F-16s, the aircraft squadrons and squad roles as I mentioned above, and the vertical stabilizers with the emblems of the fighting wings all in one place!

I was also impressed by the many profiles in the book. And it’s not one or two. It has 35 color profiles. For each Squad and role there is a profile that also mentions armor.

The book closes with the unsung heroes, who are none other than the aircraft support staff. Those who work night and day, for the Falcons to be fully operational at all times.

The book is a complete biography of the presence and action of the F-16 in the arsenal of the Hellenic Air Force, with really great eye-capturing photos. Every page is a surprise.

So whether you just like aircrafts, or interested in static modeling, this book has a place in your library. I guarantee you will read it again and again.

You can also watch the book review in our YouTube channel. There are also English subtitles.

We look forward to the next ICARUS WORKSHOP project.

The book was provide fro the review by ICARUS WORKSHOP
You can buy th book by clicking here.