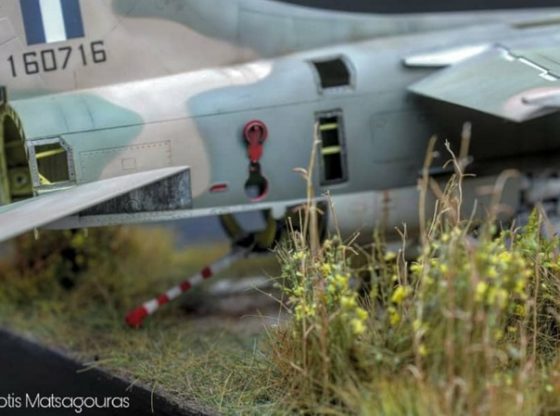 I don’t know where to start and what to say about this project! I had in my mind for a while, to make an abandoned aircraft for a long time now.  Although the theme of this build is moody, I liked the whole thing, with the wear, the hatches, the faded colors and the engine room open.
When I made the decision to start it I knew it would be difficult but also very time consuming.

A few words about the A-7D / E Corsair II Kit
At first I was wondering if it was worth buying the pretty good Hasegawa kit compared to the Hobby Boss one, since I would remove a lot pieces of the kit. Few cons and many pros, so I decided to buy the Hasegawa Kit.

Let’s start with the construction:
For the cockpit area, i used the Aires resin set, as well as for the wheel nests, also from Aires. All the rest were made from scratch with Evergreen plastic sheets and there wont be an ejection seat. Everything was removed from the electronics boxes, just as would be in a real plane. On the left there is only one open hatch which communicates with the engine air intake and on the right there are many open hatches with various pipes and cables all made from scratch. To the front is the radar area which is also vacant as the radar is missing.
Another extra correction was made to the refueling pipe, while I found that the piece provided in the kit was not right.  I started making it with evergreen while i use Master’s refueling probe. Another big area is the engine compartment, which was made from scratch by faithfully following photos and pictures of abandoned HAF’s Corsairs. There is nothing there and all there is, are some tubes and “nerves” from the hull of the aircraft.
For the wheels I chose to keep the one provided with the kit since they are correct. One of the two wheels was left without a tire as I wanted to keep just the rim, while the other wheel just had some air loss!
Another big piece I chose to open was the hatches on the spine of the aircraft, as well as choosing to leave just the half of the wings, right and left.

Painting and Weathering
For the camo of the aircraft I used MRP colors. Codes: FS34079, FS34102, FS30219, FS36622.
I added white color more than 70 – 30 to all the camo colours, as the aircraft laying there over time, sun and rain, had its colors faded. Then a gloss varnish was applied to the MRP and after letting it rest for couple of days it used oil paints(dark green, light green, brown, white and gray) for weathering. Depending on the camo color, i used the variant of the corresponding oil in order to highlight the aircraft’s panels and rivets. In the area of ​​the belly of the aircraft, i used some rust (oils and pigments) just to highlight the condition that the aircraft has..
Decals came from Icarus Decals. There was no intervention since most are in good condition.

Finally,i airbrushed the entire aircraft with MRP matt varnish, except the engine compartment, and the doors and hatches I choose to left open