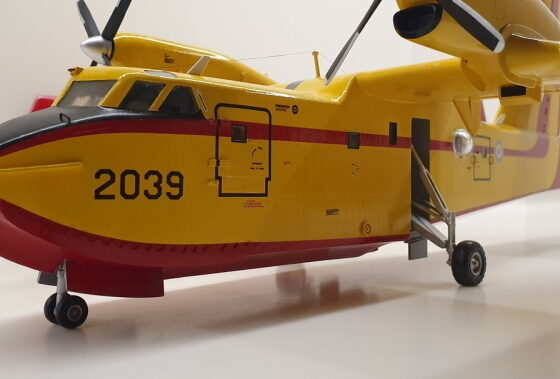 After twenty years of abstaining from our hobby, three years ago, I decided to reengage, even harder. As then, the topic is very specific: Hellenic Air Force, post WWII, at 1/48 scale. Such a model collection, however, in order to be considered complete, can only include a tri-amphibious firefighting plane.

However, kit-modeling companies do not share our concerns. The solution to scratch-build a CL-415 was a one-way street. So, just two years after returning to action and with out-of-the-box experience limited to turning a F-102 into a two-seater and a HU-16 into a anti-submarine version, the decision was made light-hearted, as it turned out later on.

The venture began, on the one hand, by searching for designs of the actual aircraft online and on the other hand, with the supply of the Heller kit at 1/72, to be used as a guide for the interior design and more. It soon became clear that things would be much more difficult than I had imagined.

Reliable designs were never found, except for some generous efforts from colleagues in the field of motor modeling and scarce data from video game graphics. Taking into account the substantial lack of experience and knowledge, the decision to 3d-print the fuselage was made, in order to address the issues of robustness, as well as the hollow sections of the roof and belly, which automatically turned the whole project into an educational and experimental exercise.

The printing was completed at a local store, based on online files. The result was disappointing, as the designs were inaccurate and print quality at least mediocre.  Thickness of the printed parts made it difficult to build the interior, resulting in building with struggle only the cockpit, with Heller’s kit as a guide and photographic material provided profusely by an excellent co-modeler George Athanasiadis.

The wheel wells were then constructed and positioned, the windows were opened and, after considerable weight was added to the nose, the two halves of the fuselage were joined. At this point one of the most painful stages of the construction began. The fuselage had precise dimensions, but that was the only correct feature. The curvature of the nose, the ceiling, and the rear part of the belly were far from that of the real aircraft.

The print material was extremely difficult to work with, as well as smoothening it, due to its hardness and cellular structure. Dremel, putty and sheets of plastic, became my best friends for a few weeks. During intermissions in the fuselage refinement, the engines were constructed from scratch, propellers were made using the ones of the P-51D, as a starting base and the landing gear, by modifying and reinforcing the metal set of a PBY-5A.

Next, the wings, the vertical stabilizer and the tail fins, as well as the CL-415’s characteristic aerodynamic aids, were made from laminates and sheets. At the same time, the air intakes, the antennas, the bands, the lamps and the hydraulic drive systems of the flaps were formed. Finally, the floats were granted by the excellent colleague Alexis Kontiveis, made out of resin by Thodoris Antonopoulos.

After all the main parts of the aircraft were joined, the model was primed with Mr.Surfacer 500, 1000 and 1200 in succession, correcting various defects along the way. (PHOTO) Finally, a coat of Mr.Surfacer White 1500 was applied, in order to prepare the background, for the final painting job on the one hand and for the rivets on the other.

Usually, priming marks the final straight for completing a model, but not in our case. The CL-415 is characterized by the plethora of rivets on all of its surfaces, which had to be constructed. After testing all the trade promoters, “Micro-Mark” embossed rivets were selected. These are resin rivets printed on decal film, which are placed just like classical waterslide decals, with excellent results.

After two months of painstaking effort, the rivets of the aircraft were placed and the entire model was sprayed with H329. After drying for several days, the model was masked to paint the red details with H3. Then the walkways with H51 followed, the nose with H12, the wheel wells with H308 and the landing gear with MC218. A coat of gloss varnish followed and then the excellent decals of “LM DECALS”, which were printed on demand were set. Finally, the model was “sealed” and not the slightest wear or ageing was performed.

So after a year of systematic effort, the project was completed. The original design was adapted to the course and the construction acquired an educational character, since we have dealt with several techniques and materials for the first time. The outcome is considered satisfactory, although it has errors and minor flaws. Undoubtedly, however, it is a unique part of the collection and is a guide to future constructions of this type.