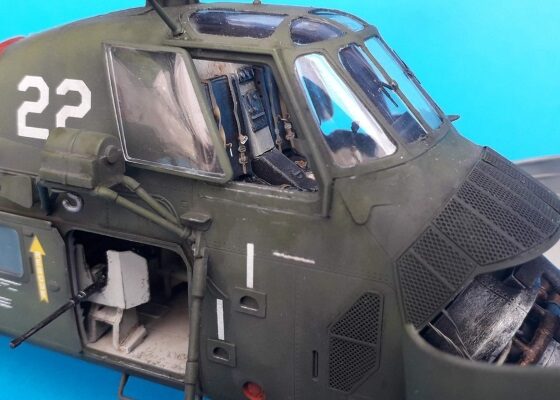 It’s said that the first impressions are the most lasting. The same goes for that kit.Well detailed, very good fit and a lot of photoeched parts, (grills, seat belts etc). The instructions could be more clear but a seasoned modeler shouldn’t have any problems.

The build started from the engine bay.  This part is very detailed but unfortunately a part of it won’t be visible in the finished model. I added some cables, according to reference photos. I created a black base using Humbrol Black Matt and touched up the engine dry brushing Tamiya Flat Aluminum. The exhaust received a coat of Tamiya Flat Aluminum followed by a random wash using Burnt Sienna and Black oil colors.

Following the cockpit assembly and painting, I started gluing together all the individual parts without any problems.

The two fuselage halves came together without problems with just a little putty necessary in places.

After washing the model with some dish detergent and an old tooth brush, I masked out the access panels, the engine bay and all transparent parts for the cockpit, locked in place temporarily with maskol.

I decided to prepare the surface applying a method between a black base color and pre-shading, airbrushing Black enamel.

I used Humbrol 117 for the green with some lightening with Humbrol 80, especially on the upper parts of the fuselage.

Both rotors were sprayed with Black and dry brushed and tabbed with a sponge of a random gray and gun metal for weathering and detail highlighting.  A wash using white color highlighted all the engraved detail on the blades. By spraying Gauzy by AK, I managed to create a very smooth surface for the decals, followed by masking of the tail for the yellow color

The decals were flawless and with the assistance of Mark Softer were applied with no problems, following every surface contours and details.

I applied a final coat of Matt Varnish and some Raw Umber and Black oils. The final result on an older base I had enhanced the realism and I hope you like it…