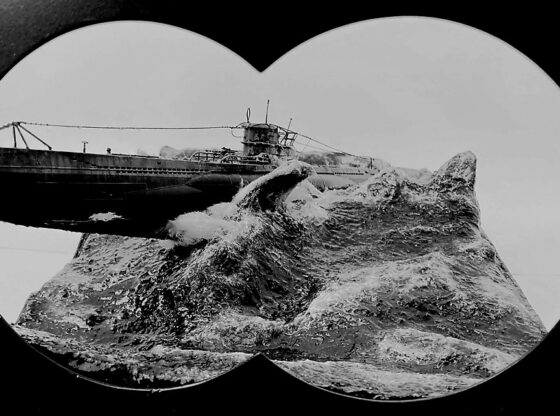 Das Boot… a title that doesn’t need any particular introduction

A book by the war correspondent Lothar Günther Bucheim describing his experiences from the 7th war patrol of U-96, a type VIIC German u-boat during World War 2.

The book is a novel, meaning that it’s partially based on true events.  The same goes for the homonymous 5 hour mini TV series from 1980 directed by Wolfgang Petersen, which was cut into a theatrical version and finally into a director’s cut version.

The book is a novel, meaning that it’s partially based on true events.  The same goes for the homonymous 5 hour mini TV series from 1980 directed by Wolfgang Petersen, which was cut into a theatrical version and finally into a director’s cut version.

The kit is #05038, 1/144 scale by Revell, produced in 2007.  After many years, Revell produced some very beautiful U-Boat kits with an excellent outer detail (which wraps all around the model) which can be build out of the box without the necessary purchase of any aftermarket photo etched sets.  The high quality decal sheet offers a selection of 5 boats, among them the U-96.

Building the kit is pretty much straight forward without any issues.  Some attention needed is at the beginning of the construction putting together the 2 halves of the hull with the 2 halves of the deck in order to get everything lined up properly.  A little bit of filler was needed to fill in some gaps at the deck/hull line.

Having decided from the beginning to place the model in the “sea”, I omitted the shafts, propellers, rudders and aft dive planes, using only the fore dive planes, as these would be visible for the scenario I had in mind.

The only add-ons was the use of the Griffon Models set for the attack periscope and the antiaircraft gun, while all other improvements on the 88mm deck gun are homemade. I also added wires to the bow planes and between the railings, while the flag pole was replaced with a needle.

For the weathering I used various washes from AK and the Tamiya Weathering sets.

I didn’t encounter any problems with the decals.  Regarding the color of the famous “laughing sawfish”, the emblem of the U-96, Revell offers it in blue color, something controversial with the prevailing view that it was light green.  The same symbol was used later in the war by all 9th flotilla u-boats as soon as the former commanding officer of U-96, Heinrich Lehmann-Willenbrock, took command and some boats had the laughing sawfish even in red color… Based on B&W photos of the time, the emblem of U-96 up until its 4th war patrol must have been blue, but that’s a whole different topic which will take long to analyze and is of no concern at this stage…

I was always “intrigued” by the idea of reproducing the scene when 2 u-boats meet in the Atlantic Ocean during a storm, a scene which actually took place for real – there is photographic evidence – but also is depicted vividly in the movie.

So, I used a large piece of Styrofoam, shaped it accordingly, added a few more pieces for the larger waves and covered the whole lot with acrylic plaster.

After it dried, I sanded it, covered the entire base with kitchen paper towels glued in place with ordinary wood glue.  Over it, I applied acrylic Gesso plaster, sanded it and applied toilet paper sheets, wetting them with diluted wood glue for the “wavy” look of the sea surface.

With the model in place, I covered the “sea” with Acrylic Medium Gel by Amsterdam, did highlights using Titanium White oil color, especial on the crests of the waves and focused on the 2 big splashing waves.

I cut 2 pieces of aluminum foil, bent the accordingly and painted them with the same colors I used for the rest of the base.  After that, I “attached” on the cotton wool with the use of #114 Artists Gloss Varnish by Talens.

I used the same technique to add waves to the hull and bow planes, while randomly applying Acrylic Medium Gel by Amsterdam on the hull, conning tower, cables, main deck etc

All this with coat after coat of Gloss Varnish, especially between the various stages of painting the base to give the impression of “depth” and the necessary “shine” of the water.

For the “binoculars” I used thick plastic sheet, cut accordingly and painted black, an “artistic” touch on my behalf!

I hope you enjoyed it as much as I did building it!