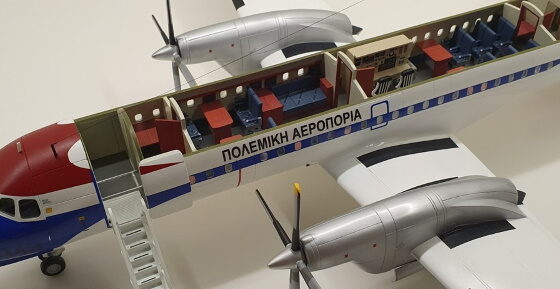 In 1981 the Greek Airforce procured six turboprop passenger YS-11A, which until then belonged to the Olympic Airways fleet. These are Japanese-made twin-engine aircraft that can carry 60 passengers and are, as far as we know, the only European fixed-wing warplanes made in Japan. One of them was used, with a mixed configuration, for radio aids control and VIP flights. This role, as well as the special coloring, were the reason for the construction.

An internet search for the Bandai 1/72 scale kit, to be used as a construction guide, revealed that a Japanese fellow modeler was producing the kit in 1/48 scale in 3D, apparently because of its origin. We are in luck, I thought. Combined with photographic material from the actual aircraft, which is on display at the HAF Museum, as it has been retired for years, I thought the project was starting on the right foot. Nope! It soon became clear that things would be much more difficult than I thought.

Within a relatively short period of time, both kits were received. The Bandai kit is ¨spartan¨, so it cannot be used as a guide and the Japanese’s is a remarkable effort, very precise in shape and dimensions, however due to cost, the printing is of mediocre quality. Nonetheless, it incorporates the option of a cut-away fuselage, a feature that serves our purpose. The biggest difficulty came from where we did not expect it. Photographs of the actual aircraft, especially from the inside, are rarer than those of an experimental design. After extensive research and relevant appeals to all kinds of modeling groups and stakeholders of general aviation interest, a considerable number of photographs of the aircraft and a few, but satisfactory, of this interior configuration were collected. Many thanks to Antonoglou Pantelis, Vranas Themis, Gavriil Georgios, Doxas Ioannis and Kampouris Ioannis, for the valuable photographic material.

Having prior experience with the construction of the CL-415, the first task we undertook was the grinding of the individual parts of the fuselage, both externally and internally, as almost everything would be in plain sight. The printing material was extremely difficult to work with and smooth, due to its hardness and cellular structure. At this stage, we created a cast from the passenger windows, then a mold and poured more than fifty windows with liquid glass.

The beginning was made, traditionally, with the cockpit, as the plethora of photos contributed the most to its creation. The kitchen and the toilet of the aircraft followed, being a former passenger plane, an unprecedented experience for me, without any particular difficulties. After significant weight was added to the nose, the cockpit, fuselage and tail were joined, while the floor of the fuselage was also constructed, with the individual dividers, which delimit the space of the crew and that of the VIPs. Then, based on the photographic material, the seats and tables in the passenger compartment were made, as well as the console for the control of the radio aids. Finally, the landing gear wells, doors and struts were constructed and installed, the engines and propellers were configured, while the aircraft antennas were added.

The model was primed with Mr. Surfacer White 1500 and sprayed whole, two coats with H01. After drying for several days, the model was masked to paint the red and blue details with Η467 και Η15 respectively. This was followed by the engines with MC218, walkways and anti-icing boots with H77, the nose with H12 and finally the landing gear wells and struts with H11. Gloss varnish followed and the few decals were placed, which were designed and printed at home. Finally, the model was “sealed”, while not the slightest wear or aging took place.

After nine months of systematic effort, six of which in quarantine, which increased the time available, the project was completed. The final result is considered quite satisfactory, although it has minor imperfections. Undoubtedly, however, is a unique part of the collection and is a guide for future constructions of this type.