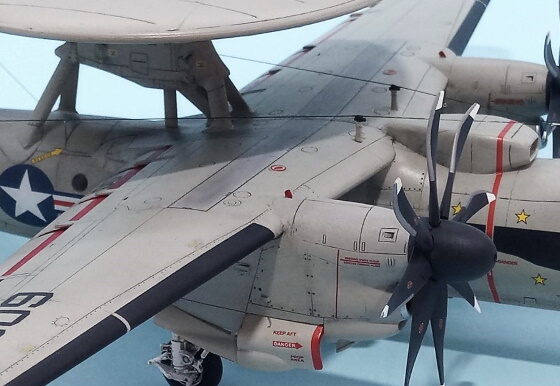 The Northrop Grumman E-2 Hawkeye is a All-weather early warning aircraft (AEW) of the United States.

This twin engined turboprop airplane was designed and developed towards the end and the beginning of the 50ies-60ies by Grumman for the US Navy to replace the older piston engined E-1 Tracer. The airplane’s performance has been improved on the E-2B and E-2C versions, with most of them on the radar, radio-telecommunications and other electronics.

The 4rth main version of the Hawkeye is the E-2D, which flew for the first time in 2007.

The E-2 was the first aircraft ever to be designed specifically for its role, in contrast with the existing modified version like Boeing’s E-3 Sentry. All subversions of the Hawkeye have been in continuous production since 1960, giving it the largest number produced of any aircraft-carrier aircraft.

The E-2 received the nickname “Super Fudd” because it replaced the WF (later E-1) “Willy Fudd”.  The last decades, the E-2 is usually referred as “Hummer”  due to its distinctive noise of its turboprop engines.

Except of its service with the US Navy, smaller numbers of E-2s’ have been sold to the Armed Forces of Egypt, France, Israel, Japan, Mexico, Singapore and Taiwan. Grumman used the E-2 in order to produce the carrier version C-2 Greyhound (Carrier On Board Delivery).

Grumman used the E-2 in order to produce the carrier version C-2 Greyhound (Carrier On Board Delivery).

HASEGAWA’s kit on the 1/72nd scale

The Hasegawa kit is excellent and comes with engraved details.

The build starts from the cockpit, where the only addition was the seat belts.  After installing the required weight (and some more just to be sure) on the nose, the two fuselage halves were glued together.

Next came the wings to the fuselage.  The navigation lights come in two options, the one is to paint the wing it self and the other to cut the plastic part of the wing and use the clear parts, which are more realistic looking, of course the second method was chosen, painting the clear parts with Clear Green and Clear Red before gluing them into place.

After that they were sanded with sandpaper and rubbed with the polishing compounds by Tamiya.

Hasegawa offers the possibility of installing the flaps in the extended or retracted position.  For our build, the extended option was chosen.  Therefore the inner part of the wings and moving parts was painted with Model Master Insignia Red, mixed with some White and masked off for the painting of the rest of the model.

The tail assembly was masked as well after it was painted and all decals were in place as it would be difficult to do so at a later stage and was left aside. Next was the assembly of the engine nacelles with the landing gear bays, painted Gloss White by Model Master and glued to their respective positions on the wings.  The nose comes in a clear part in order for the carrier landing lights to be visible, so, after masking, it was painted from the inside with Gloss White and was glued in place.  The last part to complete the fuselage was the clear canopy, which comes with a part of the fuselage.

This was challenging as in the real airplane, the two side windows have a coat of mirror like paint to reduce the radiation level from the radar.  The instructions mention the use of Clear Yellow but that wouldn’t be realistic.  So and after many experiments, it received an initial coat of Clear Yellow followed by a coat of a mixture of Gold and Bronze by Alclad.

The result was rewarding enough as it was very close to the real thing.  After it was in place and masked off, the entire model was prepped for painting.

First the anti-icing surfaces on the wings and the anti-glare surfaces in front of the cockpit were painted Black.  After masking those off, the entire model was painted Gull Grey by Model Master.

Meanwhile I dealt with the landing gear.  The wheel rims come separate from the wheels, which have the right shape to represent the “pressed” look, so it was very easy to paint them.  The struts, rims and inner sides of the landing bay doors were painted Gloss White.

Next step was the eight bladed propellers, which are very imposing and beautiful in relation with the older four bladed ones.  After assembly, they were painted Black. Decals are given for the blades but I preferred to paint them for more realism.

Extra caution was needed in masking but the outcome is very impressive.  The entire model was coated with Gloss Acrylic Varnish for the decals which due to the fact are very large and old had to be handled with extra caution.  So I coated them with Microscale’s Liquid Decal Film and placed with reverent care, especially the larger ones which come in one piece.  The final result was very rewarding. Next step was a coat of Gloss Acrylic Varnish to seal the decals, followed by a wash with AK’s panel-liners and some weathering with a dry brush on the walkways on the upper side of the fuselage.

Next were the blade antennas and the final coat of Semi Gloss Acrylic Varnish by Model Master.

Using some super glue and thin thread I glued the antenna wires. The final pieces were the radar plate and propellers.

The build was a little bit demanding but the finished model is very rewarding and beautiful.