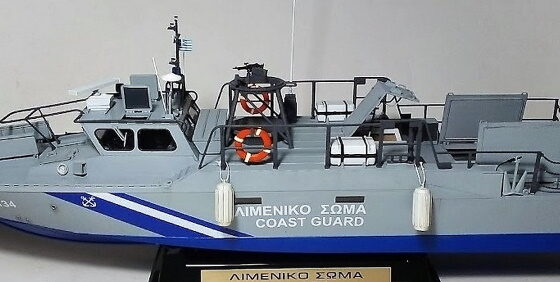 I wish to thank my fellow modellers, Stamatis Anthis, Elias Sipsas and George Moutis for their help to finish and depict correctly the model.

All the photos of the real combat boat came from the web.

A few words about the real craft

The CB-90 is constructed in Sweden by Dockstavarvet Co. which is a member of the SAAB company.

It is made from aluminum and is very durable, flexible and agile.

It can carry up to 20 fully equipped soldiers and has the ability to disembark them from the bow. It has an armored command cabin. It’s armament varys depending the formation. The basic weapons are two (2) 12,7 mm machine guns, one on the right side of the bow and another one on a turret behind the command cabin.

It has the capability to carry depth charges, even mines. It has 2 engines Scania DSL14, 850HP each but they have the ability to fit Volvo or Cat engines depending the versio5and the demands of the final user. All the crafts have the Rolls Royce FF410 propulsion system that gives agility and a speed up to 40 knots.

Tiger models offers the kit in a suitcase packaging in the big for a craft scale of 1/35, meticulous in every detail.

It consists of 22 sprues with about 430 pieces, 1 sprue with photo engraved, 1 sprue with transparent, piece of thin metal chain, a thread, a support base and two metal plates-weights, so that the boat acquires a corresponding weight and realism. Almost all the hatches have the ability to be placed in an open position, which means the construction of the interior for anyone who wishes. The instructions sheet comes in a book type and it’s very informative and easy to use. The fitting is very good. Lastly I left the decals card, which includes decals for a Malaysian navy boat but the main decals and numbers are for the three Greek Coast Guard boats! For those who deal with remote control models it has a good base for RC.

My choice was to keep as many hatches and doors open as possible so that there is access to the interior, which makes construction even more difficult, but ultimately worth it.

The Coast Guard procured three vessels of this type, in 1998, version CB-90 HCG. Wanting to represent, one of the three boats of the Coast Guard I searched for photographic material on the internet. Although the results were few I realized that the differences with the kit were many. Below I will point out the ones I located and was able to convert into my construction in order to approach the respective vessel of the Hellenic Coast Guard.

1) In the area behind the bridge, the kit provides seats and life jackets. Greek crafts are configured in a kitchen and dining area at the front, towards the bridge, while at the back there are four bunk beds that are separated from the dining area by a door. They were made from scratch with a sheet of plastic and wood using a 1/35 figure for measurement.

2) The engine room area remains as given by the kit, with Scania engines. A fire extinguisher was added from the spare box.

3) The command area in the bridge, remains as it is, I just added some “accessories”, such as a map, binoculars, mugs and various others, for greater realism.

1) Of the three windows on the side of the boat the middle one should be closed, ours have two on each side.

2) On the sides there are also three square cross-section holes that must also be closed.

3) On the deck of the boat, all the rhombus bollards were removed as well as the corresponding ones in the space above the engine. The “rescuers” are two and not four, so the respective holes must be closed. In an attempt to represent the “gluing” of the deck slabs, semicircular plastic rods were placed which were then rubbed to obtain the desired thickness.

4) From the turret of the machine gun, the pilot’s seat must be removed, and the kit weapon replaced with an FN Mag. I got it from 3D Microcosmos.

5) The antenna bases are in different positions from those given in the kit, so they must be placed accordingly on the front right side of the boat and at the  back near the flagpole.

6) Above the bridge there are two antennas on the right and left as well as a small projector on the mast. There is also a blue lighthouse mounted on a square base, as well as a radar antenna; Everything was made from the spare box and plastic sheet.

7) On the left side of the bridge, where the piece J18 is placed, a triangular cover was formed with a sheet of plastic and a round piece of plastic was added, probably it is the ventilation of the toilet located just below!

8) Note that at the stern of the boat there is a mechanism for the anchor, which I could not build.

The colors I choose are:

The whole boat was initially primed with Mr Surfacer 1200

The reefs with Vallejo 71088 French Blue

The decals, although large, are of a very good quality and applied perfectly with minimal improvement.