Exact representation in 1/48 from the Revell kit: Rafale F3R… Hellenic 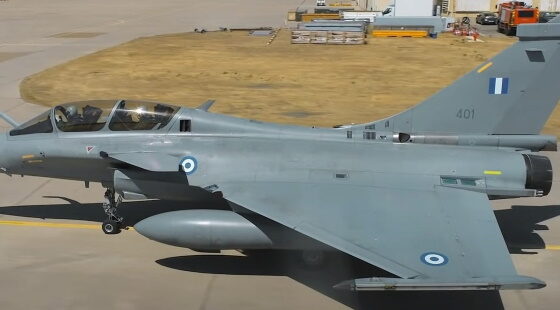 The Rafale landed at Tanagra but at our modeling benches as well! The research for the most suitable kit to reproduce the Hellenic Air Force Rafale had already begun with the announcement of the agreement.

In the photo are highlighted the points-areas which a modeller should pay attention at.

1. The AAR tube is present

2. Some details at the nose cone have to be highlighted

3-4-5-6 (Left and Right respectively). All the basic “humps” for the aircrafts’ sensors are present (Optronique Secteur Frontal / OSF at the forward part of the nose and SPECTRA at the perimeter of the aircraft).  Their detail though could be increased and I reckon that a lot of 3d manufacturers will concentrate in that area.

7. The weapons hard points on the wing tips need some small changes.  By the way, (19-20) although the kits offer a plethora of weaponry, both Air to Air as well as Air to Surface, however they DO NOT offer the METEOR, neither the EXOCET missiles, nor their respective hard points/pylons.  But they do come with wonderful MICA and SCALP missiles!!!

10-11. these are present but the detail on the Chaff & Flares distributors for the SPECTRA need improvement.

12-14-15. the aft antennas of the Self Defense System are given but they also need some improvement.

13. Engines: the nozzles are OK and with a good detail, but surely the resin manufacturers will enhance them as well. Unfortunately the air ducts are NOT given and special care must be taken because otherwise from the front (in the kit) it looks ugly.

16. The “shark fin” radio antenna on the spine of the aircraft has wrong dimensions and the beacon light at the same area is in the wrong position.

17. RAM surfaces: They are present on all surfaces of the kit, especially on the lower surfaces.  Some may need to be highlighted or even alter in shape.

18. The “hump” under the cannon on the right side of the aircraft is MISSING.

18Β. the warning stencils must be in ENGLISH, as in all export versions of the Rafale.  It is pointed out that the “RESCUE” stencils are in different positions on the single and on the twin-seater.

As far as the decals, the Hellenic Company LM Decals has cared for them.  You can purchase the decal sheet which has all the above mentioned warning stencils.

For the various pending disputes as well as for the necessary improvements, you can purchase the set produced by Theodore Andonopoulos, who did an absolutely superb job.

All these come with analytical instructions for the right installation of the parts.

All research and recording of the differences was done by Stavros Soulis, to whom we are thankful.  Such in depth analysis is valuable for all modellers.