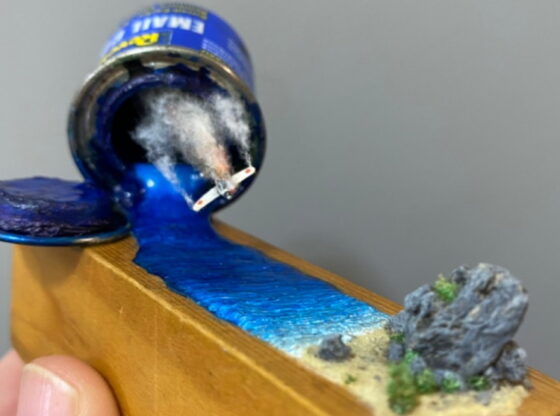 The Diorama is in 1/1200 scale with the title kamikaze and was awarded by the I.P.M.S. Of Greece in the 40th competition with gold prize.

The inspiration started by holding this little piece of wood that I had on the workbench as an aid to my work. When I placed the color can on it, the idea came to me and I finally decided to make a zero with a kamikaze somewhere in the Pacific to fall from the anti-aircraft after a failed suicide attack on a ship.

So I kind of started with can pouring its content onto a wood and unfolding a story. In two words “The second world in a can of color…”. The plane is almost self-made.

Bismarck seaplane changed to zero. The wings have been shown solely to give a sense of proportion.

There were a lot of difficulties due to scale in general in the setup as in the fact that it seems that the aircraft comes out of the can without leaning anywhere, in the construction of the sea, reaching my limits mainly with the smoke which i changed too many times to achieve the result I wanted. The sea was made with our well-known atlacol (white glue) and oil colours were used for painting.