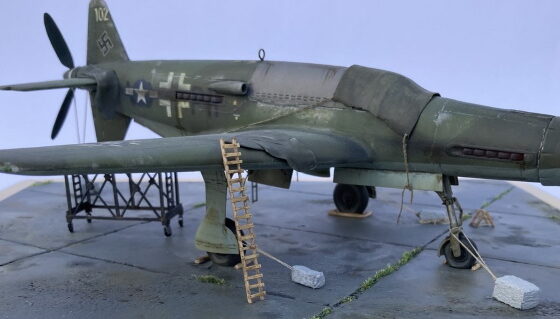 The Dornier Do-335 was one of the most interesting German airplanes of the Second World War which showed up too late and didn’t enter operational status.

The so called “Arrow” or “Aardvark” by the Luftwaffe pilots, had a plethora of innovations with two in-line alignment engines in a push-pull configuration giving the aircraft a high speed, large wing surfaces making it very maneuverable and steady for dogfights, ejection seats with discarded aft propeller and ruder through explosive bolts.

For more about this aircraft, https://en.wikipedia.org/wiki/Dornier_Do_335

At the end of the war, the Allies captured a few Do-335’s for evaluation with two of them ending up in the United States.  Only one survived until this day, after many back and forths in installations, airports, warehouses and museums and is the sole survivor of this aircraft type in the world, the Dornier Do-335 A-0 (A-02), VG + PH / 102, s/n #240102.

Related photos with this particular aircraft in US soil carrying both the German and American markings were the inspiration for my project.

The kit is the ProModeler / Monogram kit in the 1/48th scale from 1974.  It is a very old kit which shows its age and clearly is no match for the newer and much better kits of this particular aircraft. On the negatives, its moderate fit, (in mine, the two halves of the fuselage were bend to an “S” shape, the mediocre figures, a poor decal sheet, raised panel lines and very few rivets.  In the instructions the two seater version is referred to as a night fighter, something which is wrong, as in the night fighter version, the rear cockpit had a very shallow and small canopy, so you can disregard the parts given for the two wing antennas.

Speaking of canopies, be VERY careful when removing them from their sprue, as their connections points are too big and go all the way up, past the canopy frame, to the clear part, a very serious mistake…

Finally, don’t forget to add some weight in the nose area, otherwise your finished model will be on a constant wheelie…

On the positives of the kit is surely the photo-eched fret with enough detail for both cockpits in case you decide to build the two seater version, the boarding hatch and ladder, mud scrapers for the main wheels and engine cover latches.

The wheels come already “weighted” – maybe more than they should be – while the instructions are very handy with photos of the real aircraft for the various details.

Finally, you can have the two port side engines covers in the open position as both engines are molded in the left hand side fuselage half.

Because of the bad molding of the fret containing the canopy parts, I was forced to either try and look for aftermarket canopies or somehow cover up the canopy…

Fortunately I found photos of the “102” in American hands and in some of them the canopy was covered with a tarp, so the captured version became a one way road for me…

I left the photo-eched parts for the cockpit aside for another model of the Dornier Do-335 already in my stash and used only the ones for the boarding hatch and the mud-scrapers on the wheels.

I added buck shots on the nose, glued in place with wood glue (do not use superglue, as the led in the buck shots will react with the glue in a few years, leading to the expansion of the glue and the separation (opening) of the part…).

I removed the molded on pitot tube and replaced it with a pin, added the hydraulic lines on the landing gear, I scratch build the entire internal part for the port wing landing light and the two navigation lights on the wings using parts from transparent frets, drilled in the center, painted the holes with the corresponding left/right colors and sanded them down to the right shape.

As mentioned above, the fuselage was bend into an “S” shape, so I struggled enough to get it in the right shape with the help of the main wings sections coming to the rescue… The overall fit of the entire model was surprisingly good and I used very little putty in some places…

I rescribed all panel lines on the wings, upper and lower surfaces and added some of the thousands of rivets of the real aircraft…

The entire model was painted with a coat of Model Masters’ Aluminum followed by the camouflage for which I used the corresponding LifeColor set for Luftwaffe airplanes.  For the various details I used acrylics by Vallejo, Model Master and Italeri.

The German crosses on the upper side of the main wings were painted on while I had to make masks for the call sign of this particular aircraft (VG + PH) and paint those on as well.  The number “102” on both sides of the rudder was painted on free hand.

I used aftermarket swastikas while the US Navy markings came from my spares box.

The entire model was sanded down with a 2000 grid sandpaper initially and then 800 grid in specific areas, revealing the Aluminum base coat underneath.

After applying a coat of Matt Varnish by Model Master, I went on with the weathering of the entire model, using washes from AK, weathering pencils from the same company, various oils, Tamiya weathering sets and dry pastels.

Finally, the entire model was sealed with a coat of Matt Varnish by Model Master.

For the base I used a piece of blue Styrofoam, coated with acrylic constructions putty, scribed the plates and sanded it down randomly to represent the worn surface in some edge of an airport where the aircraft was parked.  I painted the base with some random light grey and weathered the surface with leaks etc using AK washes, Oil by Gunze, oils, hagiography powders, dry pastels and …real burned engine oil.

Finally, I added some “grass” in various places in between of the plates.

For the tarps, I used two part epoxy putty from Tamiya with the help of a kitchen cylinder and …bay talk so that the putty won’t stick to the cylinder, placed them onto the model to get the right shape, placing small pieces of cellophane underneath so they wouldn’t stick to the model.  When dry, I painted them accordingly and glued them into place, adding the ropes, which I waxed beforehand.

The concrete blocks on the ground are Styrofoam pieces, coated with liquid putty from Gunze (500 grid) and the tie downs are made from small pieces of wire.

All ropes were waxed before put into place.  The wheel chocks are made from small pieces of wood, so as both ladders as well. The working platform was made using various plastics, metal, pins for the wheels and thin wood for the upper part.

Generally speaking I am pleased with the final outcome, as I was able to “save” a kit with various problems, with the one about the canopies being the main one.